More On How Sheldon Adelson Bought Romney's Campaign - And The GOP/AdelZuck Party Too? 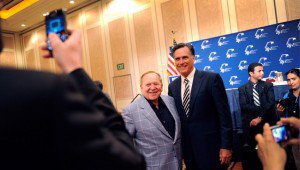 Adelson and Romney: only the servants wear ties.

I think I can fairly say I follow the deplorable influence of Sheldon Adelson on American affairs as closely as anyone, dating back to Why Would Anyone Pay Newt Gingrich $55 Million? in November 2011. There I presented evidence that Gingrich had been on the Adelson payroll since 2006, resulting in his adopting extreme Zionist and Hispandering stances.

But the story in With federal money gone, parties scramble for convention cash by Mark Z. Barabak The Los Angeles Times May 23, 2014 provides insight fresh to me of the way in which Adelson was able to buy the Romney 2012 campaign – and hence why it failed.

In 2012, Republican nominee-in-waiting Mitt Romney had to step in with less than a month to go to help Tampa close a gap of nearly $30 million.

There is no reason to look further to explain why Romney threw away the Immigration issue, dodged Chick-fil-A and embarked on foolishly costly expressions of belligerence on foreign policy. It was what Adelson (and no doubt numerous mini-Adelsons) made it clear they wanted.

But why did the GOP managers, who after all have run many conventions, find themselves in such a hole right ahead of the 2012 event?

I believe they probably did not. But responding to their Consultant genes, these parasites realized that there was a large amount of low-hanging fruit on offer. Romney’s campaign was wrecked by a feeding frenzy as his message was skewed to enable the loot to be raked in.

reports the Los Angeles Times. It sure is. The Adelzuck Party machine is designed to maximize revenues to the operatives. Elections are secondary and what happens to America is beside the point.

This corrupting greed is what has given unscrupulous men like Adelson and Mark Zuckerberg their chance.