Ilhan Omar, a current member of the US Congress, has been a disturbing example of what happens when a hostile Muslim acquires a degree of power in this country. She was generously brought here as a Somali refugee from Africa, yet Omar does everything possible to insult the nation that rescued her and her family.

She clearly hates America, shown by her comments in the magazine Vogue Arabia that living here is an “everyday assault” to her diverse identity.

Below, Omar was given the high fashion treatment in Vogue Arabia despite her political remarks. 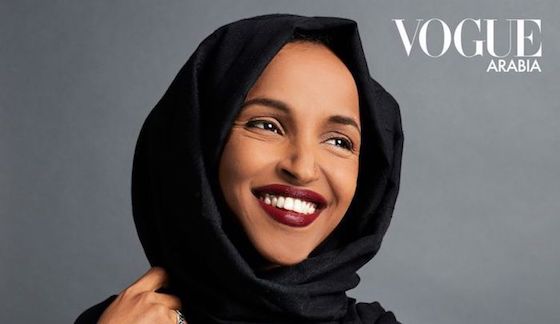 But her behavior goes beyond mere rudeness to the United States — her apparent criminal activity is plentiful and diverse. Fox News reported on Thursday that she is being investigated by several federal agencies for various scams and assorted lawbreaking:

TRACE GALLEGHER: The case was initially assigned by the Department of Justice to an FBI agent: now Democratic Congresswoman Ilan Omar is reportedly also being looked at by Customs and Immigration Enforcement or ICE and the Inspector General for the Department of Education.

The Blaze is reporting the allegations include perjury, immigration fraud, tax fraud, student loan fraud and possibly bigamy. The investigation is focused on Omar’s 2009 marriage to Ahmed Nur Said Elmi who Judicial Watch claims is her biological brother that she married to skirt immigration laws.

And now there’s allegations the marriage might also have been used to obtain illegal student loans and that while she was married to Said Elmi, Omar allegedly filed illegal joint tax returns with Ahmed Hirsi. He’s the father of her three children who she religiously married in 2002, separated from in 2008, then legally married him in 2018 before legally divorcing him.