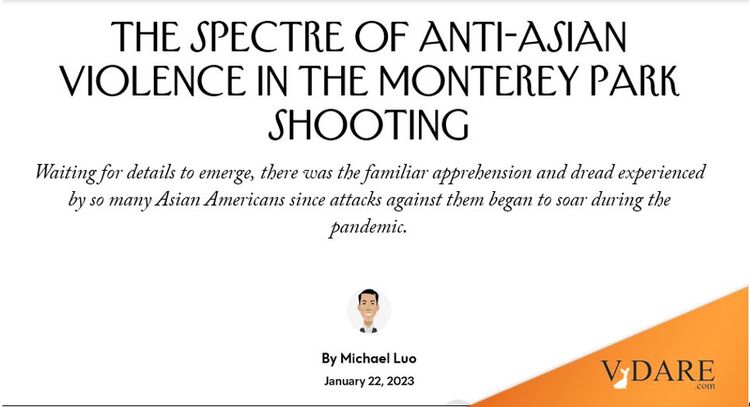 NEW YORKER On "The Spectre Of Anti-Asian Violence": Don't Disillusion The Subscribers

From the New Yorker:

The Spectre of Anti-Asian Violence in the Monterey Park Shooting

Waiting for details to emerge, there was the familiar apprehension and dread experienced by so many Asian Americans since attacks began to soar during the pandemic.

According to the CDC, from 2019 to 2020, when total homicides overall went up 30%, homicide victimizations of Asians dropped 1%. My recollection is that the flurry of videos of attacks on elderly Asians, typically by blacks, began in January 2021, not in 2020.

On Sunday morning, I was up early stealing some time before the rest of my family awoke, to work on a book I’m writing about Chinese immigration to America during the nineteenth century. For the weekend, my aim had been to finish a chapter about a harrowing episode, in February, 1885, when the white citizens of Eureka, California, rounded up more than three hundred Chinese residents in the town and surrounding region and herded them onto a pair of steamships bound for San Francisco. It was an opening act in a tragic saga in Asian American history known as the “driving out,” in which more than a hundred communities across the American West expelled the Chinese immigrants in their midst. …

On Sunday morning, as I waited for more details of the shooting to emerge, inevitably, strands of history began converging in my mind. I thought about a massacre that had taken place about a hundred and fifty years earlier in Los Angeles, just a few miles west of the site of the Monterey Park shooting. On the evening of October 24, 1871, an angry mob, bearing knives, pistols, and clubs, surrounded the city’s Chinese quarter and began dragging out terrified residents. By the end of the rampage, eighteen Chinese men had been killed, fifteen of them hanged, according to most accounts, in one of the worst mass lynchings in American history.

In Monterey Park, at about half past eight o’clock in the morning, the authorities held another news conference. They revealed that the suspect was an Asian male. So that, it seemed, was that. Apparently just another mass shooting in America, the latest evidence that the country is overrun by guns. I thought about the emotions that I’d just experienced. Had I been paranoid? Too quick to believe that a racial motivation might be the cause? I returned to the history in front of me.

Michael Luo, the editor of newyorker.com, is writing a book about the history of Chinese exclusion in America.

Meanwhile, the New York Times assigns its top headline to the mass shooting in heavily Chinese Monterey Park, CA that killed 10 and wounded 10, but never gets around to mentioning that the suspect, who shot himself, is Asian and doesn’t mention his name until the 15th paragraph.

In contrast to the NYT, the obscure website Heavy.com continues to be the place to go for the straight facts on mass shooters in the news: So, if you want to get the straight scoop without having to read all the way to the end of the article, don’t turn to the New Yorker or the New York Times, look to Heavy.