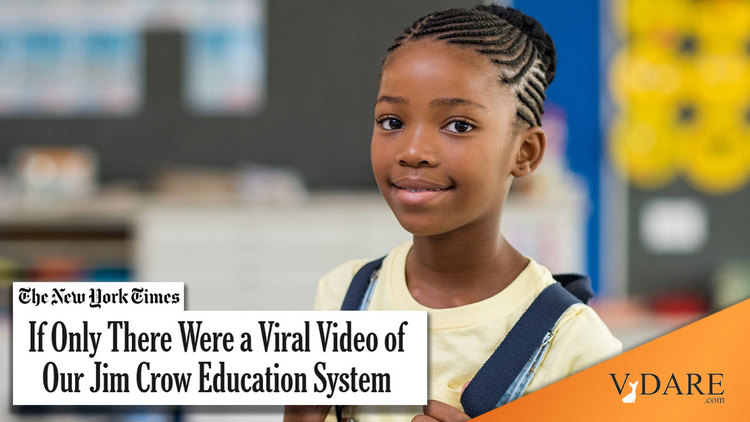 Nicholas Kristof, NYT: "If Only There Were A Viral Video Of Our Jim Crow Education System"

If Only There Were a Viral Video of Our Jim Crow Education System
May 21, 2021
By Nicholas Kristof

This article is part of a special section on George Floyd
and America, a year after his death.

We in the commentariat have leapt at covering police violence against Black citizens since George Floyd’s murder a year ago, but I don’t think we’ve been as good at responding to other inequities that cost a far greater number of lives.

Even if Floyd hadn’t been murdered, he still very likely would have died prematurely because of his race.

There would have been no headlines, no protests, no speeches. But the average Black man in America lives about five fewer years than the average white man. A newborn Black boy in Washington, D.C., has a shorter life expectancy than a newborn boy in India.

One of the challenges for those of us in journalism is to do a better job highlighting these inequities that don’t come with a viral video.

… More broadly, we in the United States embrace a public education system based on local financing that ensures that poor kids go to poor schools and rich kids to rich schools.

Yes, it’s a “public” school system with “free” education. So anyone who can afford a typical home in Palo Alto, Calif., costing $3.2 million, can then send children to superb schools. And less than 2 percent of Palo Alto’s population is Black.

Are Palo Alto’s public schools, such as the former Terman Middle School in Palo Alto, which has the highest test scores in the United States, so superb more because of their budget or because of the IQs of the parents of its students? What would the Termans, both father (Louis Terman, the Father of American IQ Testing) and son (Fred Terman, the Father of Silicon Valley) say? Well, we know what they would say, so Terman Middle School was cancelled and renamed after a city councilwoman who introduced bike lanes to Palo Alto. After all, what did the Termans ever do for Palo Alto property values?

In reality, this question has been studied endlessly, and, it turns out, black students have more spent on them per capita than white students. Stanford professor Sean Reardon of the Center for Education Policy Analysis has put together a huge database of educational inputs and outputs and determined:

As a result of state school financing reforms enacted by state legislatures or ordered by courts, per-pupil revenues are now modestly positively correlated with districts’ enrollment rates of poor and minority students within most states (Cornman 2015). This means that in most states—conventional wisdom notwithstanding—poor and minority students are enrolled in districts with higher per pupil spending than white and middle-class students….

For one thing, blacks tend to live in big cities like New York, Chicago, Philadelphia and Houston with huge office towers to tax.

Some blacks do live in poor Southern small towns and others live in desolate black majority cities in formerly prosperous places like Detroit, Gary, and East St. Louis, but it’s not all that obvious that spending much influences black test scores.

Public school finance was the topic of high school debate in 1972–73. At that time, the best social scientists, such as James Coleman, who had been paid one million dollars by the 1964 Civil Rights Act to prove that blacks were held back by insufficient school spending, had discovered, to their shock, that educational achievement was more influenced by what students brought to school than by measurable inputs to the schooling process. (Note that Jim Crow schools in the South were truly bad, but they were gone by 1970.) But how can Nicholas Kristof be expected to remember what liberal social scientists had discovered in 1966?

For example, the highest scoring black public school students in the country today live in Frisco, TX, a conservative Dallas exurb (weekday home of the Dallas Cowboys), where 11% of the students are black (13% Hispanic, 29% Asian, and 47% white). Out of the 100 largest public school districts, Frisco was only the 94th biggest spender out of 100.