NYT: OK, We've Got a New Spin on Why Ma'K the Knife's Death Was the Fault of White People, Who Must Pay

Earlier: Myron Hammonds: Who Is The Headkicker In The Stabby Columbus Brouhaha?

Since Ma’Khia Bryant, 16, was fatally shot by a police officer in Columbus, Ohio while holding a knife, her siblings have spoken out about her life in the foster care system, which ignored efforts by their grandmother to reunite the family. https://t.co/YV7zGTcxYY pic.twitter.com/yfVxgoTJ7p

A review of Ma’Khia’s time in foster care shows it failed her in critical ways. Research shows that children fare better when remaining with family. Each successive placement causes more trauma, further setting back a child in crisis. Ma’Khia had five. https://t.co/4htTevSEhU pic.twitter.com/USS4vqAufM

Ten percent! Follow the science. You can’t argue with statistics.

The 16-year-old girl was fatally shot while threatening a young woman with a knife. She had spent two years shuttling among Ohio foster homes, hoping to return to her mother.

… To calm the furor, the Columbus police quickly released body camera footage, which showed some of the fight outside the house and, they said, demonstrated that the officer had acted to protect the other woman.

But Ms. Bryant’s tragic death was also preceded by a turbulent journey through the foster care system, which had cycled Ma’Khia through at least five placements in two years — after her own mother was found to be negligent — despite efforts by their grandmother to reunite the family.

Ohio places children in foster care at a rate 10 percent higher than the national average, and child welfare officials here are considerably less likely than in the country as a whole to place children with their relatives. Black children, like Ma’Khia and her sister, account for nearly a third of children removed from homes — nearly twice their proportion in the population.

A review of Ma’Khia’s pathway through foster care shows that it failed her in critical ways.

Research has demonstrated that children fare far better when they remain with family members, a practice known as kinship care.

No doubt, but aren’t children who wind up in foster care more likely to have worse kin than average? After all, that’s why they are in foster care.

It also shows that each successive placement causes additional trauma, further setting back a child in crisis.

And the worse-behaved the child is, the more likely he or she is to shuttle from one foster home to another.

A spokeswoman for Franklin County Children Services, which had custody of the siblings, declined to comment on Ma’Khia’s case, citing confidentiality laws. Angela Moore, their foster mother at the time of Ma’Khia’s death, talked about the teenager and the events leading up to her death but did not respond later to detailed questions about the Bryant girls and their care.

This account is based on interviews with Ma’Khia’s family members and acquaintances, as well as court documents, and other case records that were provided by her mother’s lawyer.

So, you can trust that this New York Times news article will be totally unbiased.

This article appears to be the lawyer’s strategy for winning the Ghetto Lottery. The lawyer has evidently given up on getting a big payout from the police department. Even during the Racial Reckoning, it’s unlikely a jury would find fault with the policeman’s extraordinary performance. Instead, the plan seems now to get a big settlement from Franklin County Children Services on the grounds that, since black people have no agency and thus can’t be at fault ever, some taxpayer-funded organization must pay up.

The oldest of four children born to Paula Bryant, a nursing assistant, and Myron Hammonds, Ma’Khia was removed from her mother’s home in 2018, and spent 16 months living with her grandmother Jeanene Hammonds.

This is not news fit to print in the New York Times, but Ma’Khia’s mother has twice been charged with domestic violence and her father has been charged eighteen times with various crimes. 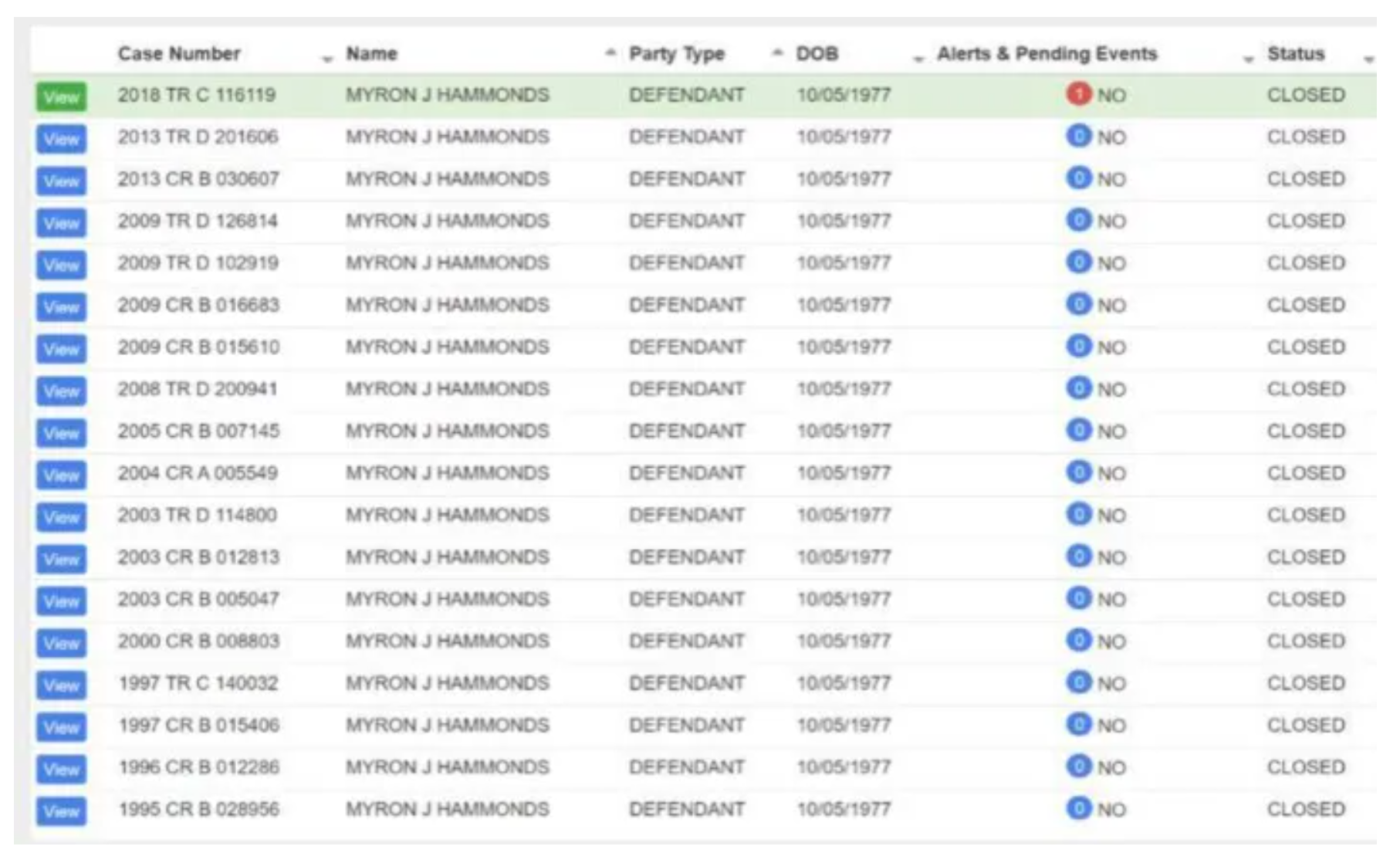 Back to the NYT:

When her grandmother was kicked out by her landlord, the siblings went into foster care and spent two years cycling through short-term placements, arrangements that dissolved one after another.

It’s almost as if the stabby teen and her sister were a handful to care for.

To me, the most fascinating part of the story is that all hell didn’t break loose until immediately after Ma’Khia’s kin, in the person of her father Myron Hammonds, showed up only seconds before his daughter’s death. 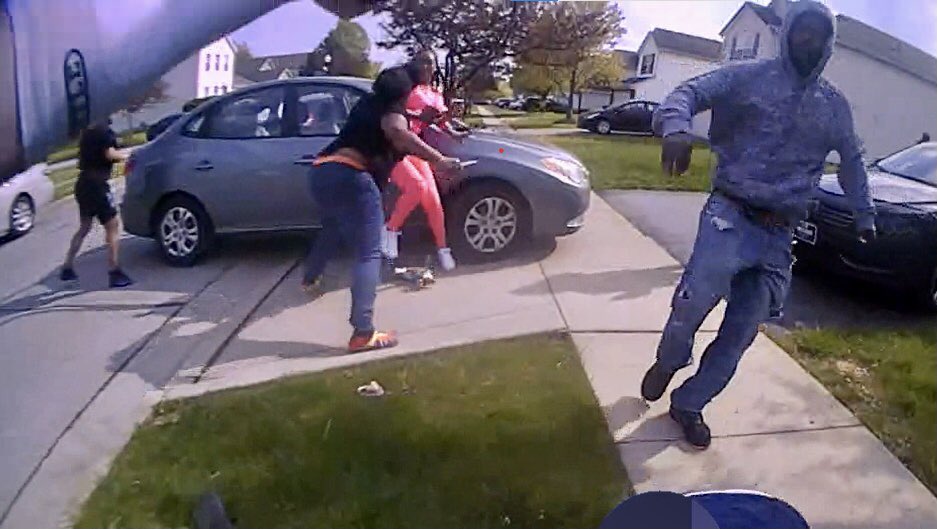 For example, Ma’Khia’s father Myron Hammonds showed up 20 seconds before his daughter’s death and, right in front of police, kicked or as the NYT puts it “tried to kick” a young woman whom his daughter had knocked down in the head.

The NYT article doesn’t get around to mentioning this striking fact about the 16-year-old’s kin until its 76th paragraph:

As Ma’Khia charged, Ms. Craig-Watkins tumbled to the ground, and Ma’Khia’s father tried to kick her. Ma’Khia turned to Ms. Bonner and backed her up against a car.

Here’s security camera video showing the attacker’s father and his apparent role as an instigator of his daughter’s banzai charge:

Hammonds is the man in gray who pulls up in his car and walks up to a relatively calm-looking Ma’khia at 0:08 and possibly says something to her, after which she immediately goes berserk, attacks two young women, and is shot dead within ten seconds even as her kin kicks her first victim in the head.

Watching the security camera video very closely, it appears that at about 0:06 the first woman (in black) that Ma’Khia then attacked had dipped her head at Ma’Khia’s sister in white, perhaps spitting at her.

For some unfortunate individuals, who their kin are is a big part of their problems. Via Marginal Revolution from the American Economic Review:

The Effects of Parental and Sibling Incarceration: Evidence from Ohio

Abstract
Every year, millions of Americans experience the incarceration of a family member. Using 30 years of administrative data from Ohio and exploiting differing incarceration propensities of randomly assigned judges, this paper provides the first quasi-experimental estimates of the effects of parental and sibling incarceration in the US. Parental incarceration has beneficial effects on some important outcomes for children, reducing their likelihood of incarceration by 4.9 percentage points and improving their adult neighborhood quality. While estimates on academic performance and teen parenthood are imprecise, we reject large positive or negative effects. Sibling incarceration leads to similar reductions in criminal activity.