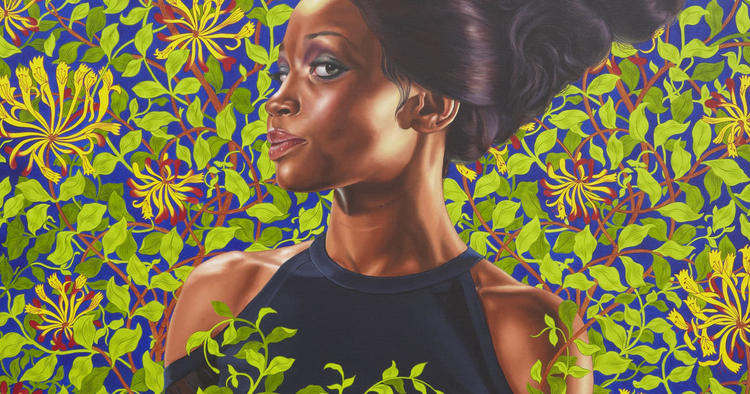 Much like the recent gargantuan Chinese-made MLK statue erected on the National Mall that looks like a cross between Mike Tyson and Chairman Mao (because the Chinese firm that carved it mostly does Mao statues), the new official portrait of a six-fingered President Obama is from the studio of gay black self-promoter Kehinde Wiley who outsources much of his actual boring work to the Chinese.

How to Make It in the Art World: 6. Outsource to China

While riffing on the Western canon. Kehinde Wiley’s global reach.

Kehinde Wiley in his Beijing studio.

In a soaring studio on the outskirts of Beijing, where Kehinde Wiley came in 2006 to set up the first of his several global production outposts, the 35-year-old painter is showing off his women. …

But one already stands out: a tall, elegant black woman in a long blue dress—the canvas is enormous, eight feet by ten feet—calmly staring down the viewer. In one hand, she holds a knife. In the other, a cleanly severed brunette female head. “It’s sort of a play on the ‘kill whitey’ thing,” Wiley says. 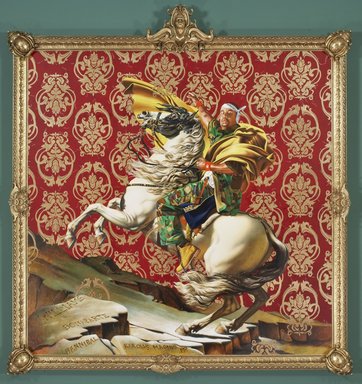 Subtle, I think. Not that Wiley’s work ever seems that subtle at first. Best known for his oversize portraits of young African-American men he finds on the street—“the boys,” he calls them—against florid wallpaperlike backdrops in poses lifted from old portraits of European gentry, Wiley has in a mere decade built a monster career around bright colors, big ideas, and a canvas the size of Earth itself, every person in every nation a potential subject. His series “The World Stage” makes that promise literal, as he globetrots from the favelas of Rio to the slums of Delhi, pulling charismatic-looking men into the studio for Renaissance-style tribute. …

That unabashed bombast has made Wiley a walking superlative: the most successful black artist since Basquiat, possibly the wealthiest painter of his generation, certainly the one who made his name earliest (he was 26 for his first major solo show), a gay man who has become the great painter of machismo for the swag era, a bootstrapper from South Central who talks like a Yale professor (much of the time), a genius self-­promoter who’s managed to have it both ways in an art world that loves having its critical cake and eating the spectacle of it, too, and a crossover phenomenon who is at once the hip-hop world’s favorite fine artist (Spike Lee and LL Cool J own pieces) and the gallery world’s most popular hip-hop ambassador. Not to mention an all-around positive guy.

Perhaps the critic has some medical implication in mind for his term “positive?”

… Which brings us back to the lady with the severed head. … Her pose is a riff on classical depictions by Caravaggio and Gentileschi, of the biblical story of Judith beheading Holofernes. And the severed head? “She’s one of my assistants.”

There’s nothing new about artists using assistants—everyone from Michelangelo to Jeff Koons has employed teams of helpers, with varying degrees of irony and pride—but Wiley gets uncomfortable discussing the subject. “I’m sensitive to it,” he says. When I first arrived at his Beijing studio, the assistants had left, and he made me delete the iPhone snapshots I’d taken of the empty space. It’s not that he wants people to believe every brushstroke is his, he says. That they aren’t is public ­knowledge. It’s just a question of boundaries. “I don’t want you to know every aspect of where my hand starts and ends, or how many layers go underneath the skin, or how I got that glow to happen,” he says. “It’s the secret sauce! Get out of my kitchen!”

Producing work in China cuts costs, but not as much as it used to, Wiley says. These days in Beijing he employs anywhere from four to ten workers, depending on the urgency, plus a studio manager, the American artist Ain Cocke. …

And working in Beijing gives him a little space to breathe. “It’s distracting,” he says of my natural interest in finding out who did what. “I want the illusion of a fully formed object without seeing the mechanisms going on behind the curtain. That’s show business.” …

… Wiley isn’t merely many things to many people. He’s whatever you want him to be. Even if all you want is a big, badass military-style portrait to hang next to your gold records. …

Back in the studio, they leaf through art-history books, and the subject gets to decide which old-style work he wants to be portrayed as. He poses for photos, and the photos become templates for full-size paintings, which Wiley produces with his assistants in New York, Dakar, and Beijing.

Or not. In many cases, Wiley acknowledges, none of that official process—the street casting, the selection of poses from art books, the painting based on those ­poses—happens at all. “The clothing, sometimes completely made up,” he says. “The models themselves, brought in from a fashion agency.” And in at least one case, the “boy” is in fact a girl. “Oftentimes, if there’s a show of ten paintings, four of them will be complete frauds.”

Wiley’s family history is much like Obama’s: his father was from Africa and abandoned his mother immediately. He eventually went to Nigeria and found him heading the architecture department at a college:

It was awkward. “He didn’t understand my intention at first. He probably thought I was there to shake him down,” Wiley says. His father had recently married and hadn’t told his wife about his far-flung progeny. “I fell into this deep depression afterward.”