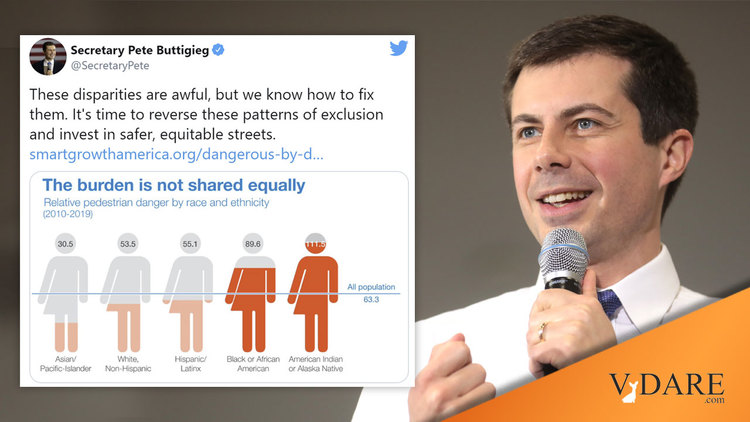 Pete Buttigieg: American Indians Sure Get Run Over A Lot

These disparities are awful, but we know how to fix them. It's time to reverse these patterns of exclusion and invest in safer, equitable streets.https://t.co/PXZX1qsMyV pic.twitter.com/qbUU1jXtgu

American Indians, who didn’t evolve with alcohol until the last dozen or so generations, have a high rate of death while trying to walk home drunk from bars and liquor stores. From the Journal of the American Medical Association:

Pedestrian and hypothermia deaths among Native Americans in New Mexico. Between bar and home

Objective: To determine the nature of excess injury mortality among Native Americans in New Mexico.

Setting: The state of New Mexico.

Subjects: New Mexico residents who died of unintentional injuries between January 1, 1980, and December 31, 1989.

Conclusions: The possession and sale of alcohol is illegal on many Native American reservations. This policy forces Native Americans who want to drink to travel long distances to obtain alcohol. These data suggest that this policy is also the likely explanation for the markedly increased risk of death from hypothermia and pedestrian-motor vehicle crashes in this population.

As I’ve been saying, if our leadership’s new macroeconomic strategy is Money Printer Go Brrrrrrrr, spending money on pedestrian safety infrastructure seems like a better use than most. But I’m not sure if that would do much for Indians. Sure looks like the homicide graph in which the Ferguson Effect added 22.9% more murders from 2014 to 2016. We see 23.8% more pedestrians killed by vehicles in 2016 than 2014: probably a similar main cause: the cops retreated to the donut shop during the First BLM Era.