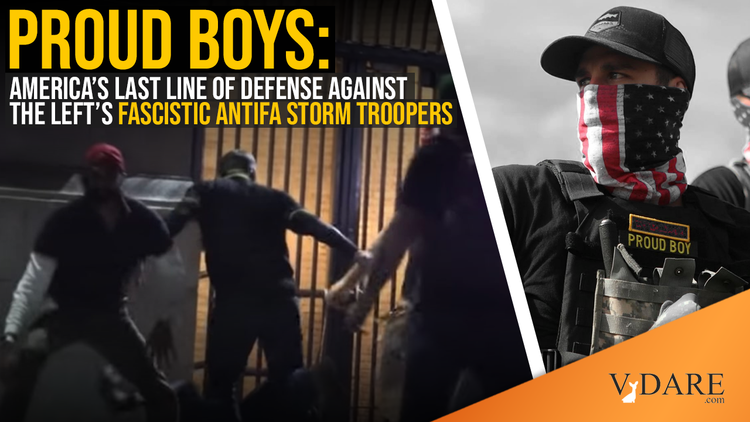 Earlier: He Should Have Burned an American Flag ...

Speaking of BLM: In Washington, D.C. on Monday, Enrique Tarrio, a leader of the patriotic and anti-anti-white Proud Boys movement, was sentenced to five months in jail for burning a BLM flag.

I had heard about that from a friend; but when I looked up the story in The Washington Post the story said he was sentenced for two crimes. What was the other crime? I read on down.

Ah, here we are. Quote from the Post, August 23rd, quote:

Police stopped a car in which Tarrio was riding shortly after it entered Washington. While taking him into custody, they said, they searched his book bag and found two high-capacity ammunition magazines bearing Proud Boys symbols.

The magazines, illegal in the District, were empty but capable of holding a total of 60 rounds.

So that was the other crime: Tarrio had two empty gun magazines in his car.

Back to the main charge: According to the Post, in a December 12th demonstration against the rigged election that gave us Joe Biden, Tarrio somehow acquired a banner of the terrorist, anti-white Black Lives Matter group that was hanging in a church in downtown Washington. He set fire to it on a street corner. He claims he didn't know it had been taken from a church, and he wasn't charged with theft.

All things considered, though, Tarrio got off lightly. Regular VDARE.com readers will recall the sad story of Adolfo Martinez, aged 30, of Ames, Iowa, who back in December 2019 was sentenced to 16 years for taking and burning a rainbow homosexual-pride flag, also from a church. As we remarked at the time, he should have burned an American flag.

Wait a minute. Five months for burning a BLM flag; sixteen years for burning a gay-pride flag? Sixteen times twelve is 192 … divide by five is 38.4 … Are the authorities trying to tell us that one homosexual is worth 38.4 black people? Where is the equity?