The transcript for the December 2 Radio Derb is up–go here to read or listen: 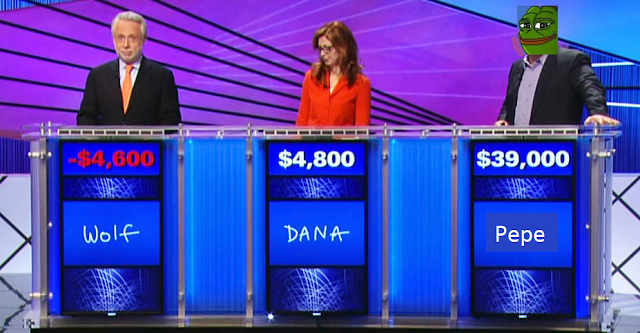 Pepe the Frog:  Who are residents of Washington DC?

Trebek: That is correct.

That's the exchange, and Pepe is indeed correct. Nationwide, blacks went 89 percent for Mrs Clinton, eight percent for Trump. Residents of Washington, DC, however, went ninety-three percent for the lady, only four percent for the Trump. That's all DC voters, all races.

Likewise, people who identify as liberals nationwide went 84 percent for Clinton, ten percent for Trump. The DC numbers — once again, all DC voters — were 93 and four.

Democrats nationwide went 89 percent to eight, Clinton over Trump. The DC numbers, one more time, all voters: 93 to four.

Washington, DC, our nation's capital, is further left than any significant demographic you can name, with the possible exceptions of social science academics and mainstream media journalists.

Mr Trump is going to need all the help and encouragement he can get in draining that swamp.