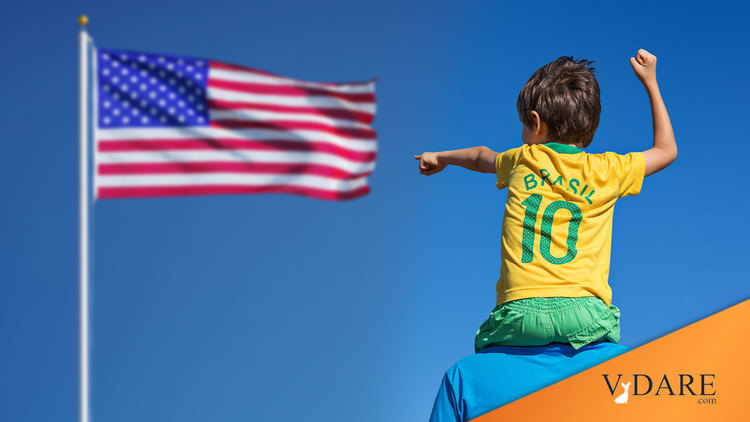 Add Romanians to the huddled masses yearning to pick the pocket of the American taxpayer. They’re massing at the border with ridiculous claims for asylum, including “fear” of Russian President Vladimir Putin, and tall tales about a Russian invasion. Brazilians, too, are turning up at the border, but they come as fake families, a ruse U.S. Customs and  Border Protection identified three years ago during the surge of illegals from the Northern Triangle.

“A number of Romanians, and some Russians, are using the southern border, the sources said, to try to get into Biden’s expansive ’Catch and Release’ network where border crossers are briefly apprehended before being bused and flown into the U.S. interior,” Breitbart News reported this week [Exclusive: Romanians Claim Fear of Putin at Border to Get into U.S., by John Binder, May 10, 2022].

Exclusive: Romanians Claim Fear of Putin at Border to Get into U.S. Romanians are no refugees they are opportunists taking advantage of the situation ⁦@SenTomCotton⁩ https://t.co/9wyPRoWenK

And the Russians have invaded Romania! …

“One family of six showed up last week claiming that Putin is invading Romania,” the source described to Breitbart News. “It sounds like they’re coached. They have passports and birth certificates when usually migrants have none of that with them.”

“They want the fast track to immigration,” another source said. The source said for at least the last year, Romanians have been arriving at the border more and more.

As for Brazilian illegals, the Wall Street Journal disclosed that outright immigration fraud.  Brazilians know that “families” must be released thanks to the leftist kritarchy.

So “Bruno Silva made his way across the muddy Rio Grande along the Mexican border with El Paso, 11-month-old Maria perched on his shoulders. An exhausted Shyrley Oliveira staggered behind,” the Journal continued:

They looked like just another family of migrants crossing to the U.S., Ms. Oliveira said, recalling the journey from Brazil she made at age 18 in 2019.

Although Ms. Oliveira is Maria’s mother, Mr. Silva wasn’t her father. In fact, he had only gotten to know Ms. Oliveira a few weeks earlier as part of what authorities call a child-renting scam that has been used by some Brazilians fleeing poverty to try to get into the U.S.

Ms. Oliveira had long wanted to migrate to the U.S., but a trip brokered by smugglers would have cost her $8,000, she said. Under the arrangement, Mr. Silva agreed to pay $3,000 toward Ms. Oliveira’s fee in exchange for letting him pose as Maria’s father at the border, according to Ms. Oliveira and Brazilian police.

[Desperate to Cross Into the U.S., Some Brazilians Create Phony Families, by Luciana Magalhaes, Samantha Pearson, and Michelle Hackman, May 8, 2022]

Police have discovered a growing smuggling practice in Brazil: pairing women and children who want to migrate with unrelated men, who can defray the cost of a trip and who benefit because they can travel to the border as a family https://t.co/DP5A3XRwWd

In 2019, DNA testing of “families” revealed that 30 percent were fakes, and the chief of the Border Patrol testified to the Senate Judiciary Committee that border agents had apprehended  3,500 fake families as of May that fiscal year. As well, Senators learned that illegals rent babies to create those fraudulent families: