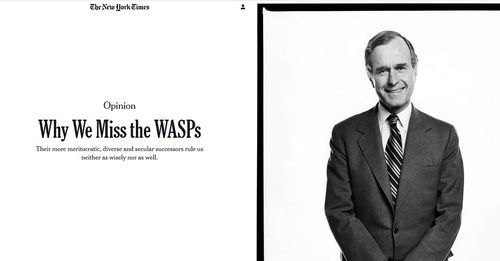 Ross Douthat: "Why We Miss the WASPs"

Why We Miss the WASPs

Their more meritocratic, diverse and secular successors rule us neither as wisely nor as well.

Put simply, Americans miss Bush because we miss the WASPs — because we feel, at some level, that their more meritocratic and diverse and secular successors rule us neither as wisely nor as well.

Foer suggests this nostalgia is mostly bunk, since the WASPs were so often bigots (he quotes Henry Adams’s fears of a “furtive Yacoob or Ysaac still reeking of the ghetto”), since their cultivation of noblesse oblige was really all about “preserving [a] place at the high table of American life,” and since so many of their virtues were superficial, a matter of dressing nicely while practicing imperialism, or writing lovely thank-you notes while they outsourced the dirty work of politics to race-baiting operatives. …

However, one of the lessons of the age of meritocracy is that building a more democratic and inclusive ruling class is harder than it looks, and even perhaps a contradiction in terms. You can get rid of the social registers and let women into your secret societies and privilege SATs over recommendations from the rector of Justin and the headmaster of Saint Grottlesex … and you still end up with something that is clearly a self-replicating upper class, a powerful elite, filling your schools and running your public institutions.

Not only that, but you even end up with an elite that literally uses the same strategy of exclusion that WASPs once used against Jews to preserve its particular definition of diversity from high-achieving Asians — with the only difference being that our elite is more determined to deceive itself about how and why it’s discriminating.

Those virtues included a spirit of noblesse oblige and personal austerity and piety that went beyond the thank-you notes and boat shoes and prep school chapel going — a spirit that trained the most privileged children for service, not just success, that sent men like Bush into combat alongside the sons of farmers and mechanics in the same way that it sent missionaries and diplomats abroad in the service of their churches and their country.

The WASP virtues also included a cosmopolitanism that was often more authentic than our own performative variety — a cosmopolitanism that coexisted with white man’s burden racism but also sometimes transcended it, because for every Brahmin bigot there was an Arabist or China hand or Hispanophile who understood the non-American world better than some of today’s shallow multiculturalists. …

If we would learn from their lost successes in our own era of misrule, reconsidering this idea — that a ruling class should acknowledge itself for what it really is, and act accordingly — might be a fruitful place to start.

Lots of people are very mad about this column.