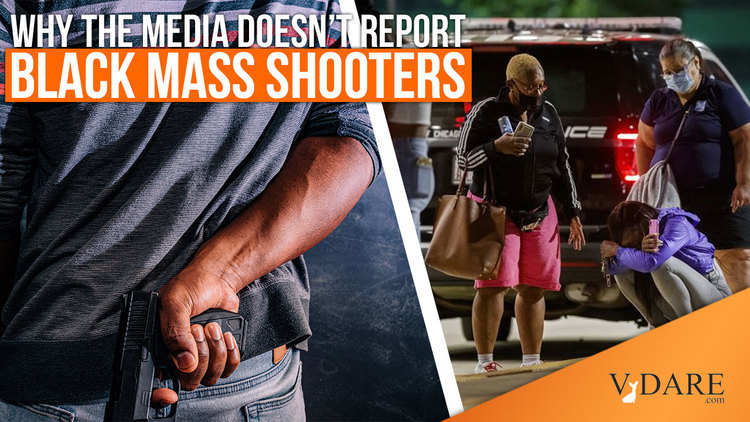 From my new column in Taki’s Magazine:

As the evidence continues to mount that 2020’s record growth in murders was mostly due to “BLM” meaning, in practice, Black Lives Murdered, it’s worth reviewing one of the more subtle reasons why so many people can’t think clearly about America’s murder problem.

Besides the obvious partisan, moralistic, and antiwhite racist causes for why numerous people can’t incorporate into their worldview the important fact that blacks, who make up 13.4% of the population, commit the majority of murders (blacks were 55.9 percent of known murder offenders in the FBI’s 2019 statistics), one particular cause of brain fog involves the category of “mass shootings.”

Mass shootings are followed by the media, so you don’t have to wait around for the FBI to announce the official murder stats next September. Thus, they are useful in tracking what is happening on America’s streets in near real time.

Mass shootings spiked upward spectacularly from late May onward, providing an accurate leading indicator that the media-declared Racial Reckoning was getting a huge number of blacks murdered after George Floyd’s fentanyl-assisted death on Memorial Day. As I reported in early September, in June through August, the number of mass-shooting incidents was 72 percent higher in 2020 than in 2019.

But if you are the kind of smugly cultured person who avoids watching if-it-bleeds-it-leads local news, the only murders you hear about on the carefully curated national news are likely to be mass shootings. And most of the mass shooters you will hear about from NPR are likely to be white men. And, overwhelmingly, the mass shooters whose names become bywords for villainy in the prestige press and echo down through the decades, such as Dylann Roof, are white men. Hence, tens of millions believe that white men are the main murderers.

But when relatively objective sources, such as Mass-Shootings.info, Gun Violence Archive, and Wikipedia, try to make up lists of mass shootings using the rule that four or more victims, whether killed or wounded, equals a mass shooting, they wind up with something that looks quite different: lists dominated by the sheer quantity of black-committed mass shootings. For example, Mass-Shootings.info reports that 73 percent of 2020’s mass shooters who have been charged are black. (Due to low clearance rates in black neighborhoods, the real percentage is likely even higher.)

Even if you try to be honest, it’s still easy to become confused because there are two fundamentally different types of mass shootings …