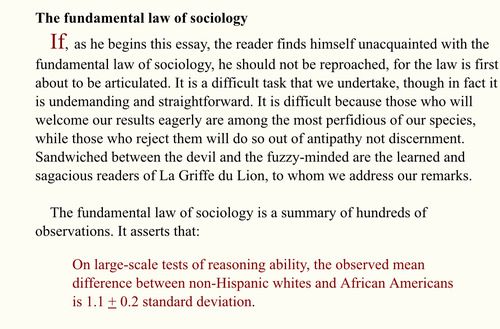 Sailer In TakiMag: The Fundamental Constant of Sociology

From my new column in Taki’s Magazine:

The Fundamental Constant of Sociology

With the perennial race-IQ controversy back in the news, due to The New York Times attempting to put the boot in on 90-year-old Nobelist James D. Watson from the left and Nassim Nicholas Taleb thundering on against IQ from the right, it’s worth calling attention to one of the most elegant statistical essayists of the 21st century, La Griffe du Lion.

La Griffe, the Zorro of statisticians, wields Occam’s razor with aplomb unique in recent decades. He is a thinker comparable in significance to Taleb, even though their approaches are 180 degrees opposite.

In truth, the scientific question of whether the racial gap in IQ is partially genetic in origin gets people so worked up emotionally because it is widely seen as a proxy for the moral debate over: Who is more to blame for black dysfunction, whites or blacks?