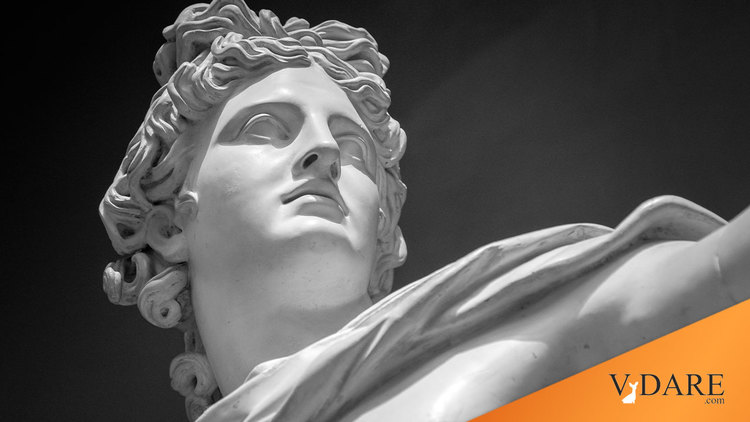 Sailer In TakiMag: The Measure Of Man

My new column in Taki’s Magazine is one of my more intellectually ambitious ones:

The Measure of Man
Steve Sailer

Why did Europeans come to dominate the world from roughly 1492 onward?

We live in an age increasingly resentful of the world-historical achievements of white men over the last six or eight centuries. Therefore, it’s worth trying to understand better how and why Europeans accomplished so much. Was it due to their vices, which surely our brave new world can do without? Or was it due to their virtues, about which we ought to think twice before discarding?

For example, during the racial reckoning and the not so great reset, American institutions are jettisoning willy-nilly their time-tested selection systems such as standardized testing. What if rather than a malign white-supremacist conspiracy, IQ-like tests are instead one characteristic development of a long Western tradition of progress that has, among much else, reduced infant mortality by a couple of orders of magnitude?

Jared Diamond’s 1997 best-seller Guns, Germs, and Steel: The Fates of Human Societies offered a straightforward materialist explanation for why Europeans conquered so many non-Europeans.

Much of Diamond’s analysis was prefigured in books by historian Alfred W. Crosby about the impact of Christopher Columbus on world history, such as The Columbian Exchange: Biological and Cultural Consequences of 1492 (the West sent wheat, smallpox, and yellow fever to the New World and brought home potatoes, corn, and syphilis), Ecological Imperialism: The Biological Expansion of Europe, 900–1900, and Germs, Seeds and Animals.

In Crosby’s little-noticed 1997 book The Measure of Reality: Quantification and Western Society, 1250–1600, however, he dared take a step beyond what Diamond was writing at the same time and ask: could it be that Europeans won because they developed better ways of thinking?

…seems hilariously unlikely today, but what other explanations are there?… Their diseases mowed down American Indians, Polynesians, and Australian Aborigines. Their animals and plants, cultivated and wild, helped them to “Europeanize” wide expanses of the world and make them comfortable homelands for Europeans. But as I played out my role as a biological determinist, I was nagged by the impression that Europeans were incomparably successful at sending ships across oceans…that they were more efficient at operating joint-stock companies and empires of unprecedented extension and degree of activity than anyone else…. Why?