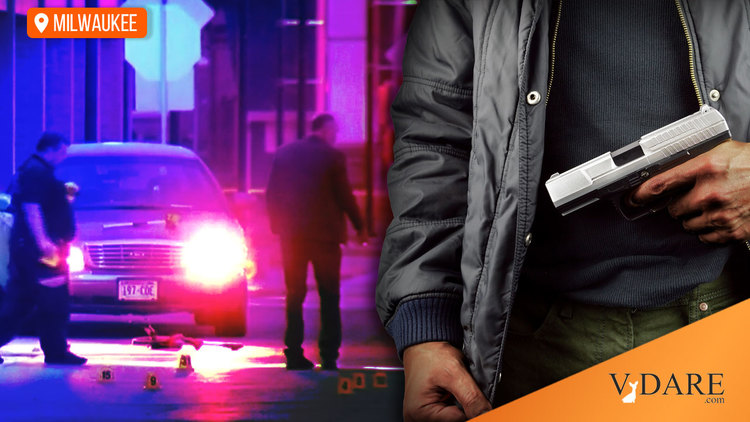 🚨Just In: A Ring doorbell camera captured the sounds of 100s of shots being fired in Midtown Milwaukee Shopping Center last night. Amazing, nobody was killed in this incident. pic.twitter.com/OnqmLO7Btn

From CBS58 in Milwaukee, as Wisconsin answers Minnesota’s challenge for the lead in the 2021 iSteve content generator run for the roses:

More than 300 gunshots ring out at Midtown Center in Milwaukee; 2 injured
By: Victor Jacobo Twitter

MILWAUKEE (CBS 58) – Milwaukee police are investigating a double shooting that happened on Sunday, May 2 around 11:30 p.m. near Midtown Center at 60th and Capitol. The victims, a 23-year-old and a 21-year-old, were taken to a hospital for treatment.

Acting Milwaukee Police Chief Jeffrey Norman said more than 300 gun shots were fired at the scene, which video on social media showed as crowded with young people in cars playing music, dancing and socializing. The location is often referred to as ‘Club Midtown’ because of the gatherings.

Acting Chief Norman said the amount of shots fired in a span of minutes is unlike anything he has investigated before.

Norman said he is concerned about the uptick in violence as the summer approaches.

“We’re not even to memorial day weekend which is usually is sometimes unfortunately for us the start of unfortunate incidents,” Norman said.

“It was insane. It was crazy. I have never ever heard that many gunshots, ever,” said Johnson. “I’ve lived [in] this city my entire life and I lived in some of the most depressed neighborhoods in Milwaukee, and I have never heard that amount of gunfire in one fell swoop over the course of several minutes.”

In Los Angeles over the last 20 years, we’ve pretty much succeeded at persuading drunk Mexicans to celebrate by firing illegal fireworks into the air rather than by shooting their pistols into air like they used to on New Year’s Eve and the Fourth of July. LAPD cops on patrol always used to pull their vehicles under freeway overpasses from 11:55pm to 12:10am on New Year’s Eve in order to not get killed by falling bullets.

It took a lot of Spanish language public service announcements and the LAPD shooting dead some drunks for shooting their pistolas, but this campaign has more or less improved the Mexican culture in Los Angeles. In the place of blasting away like El Guapo, L.A.’s Mexicans now buy tens or perhaps hundreds of millions of dollars of fireworks in Nevada and shoot them off back home in Van Nuys in a Fourth of July barrage that was non-stop for seven straight hours last year. Consequences included an apartment building burning down, a brushfire, and a lot of dogs having a really bad night, but nobody was killed.

Maybe black cities like Milwaukee need campaigns to persuade African-Americans that instead of expressing anger, exuberance, a pocketful of Bidenbux, or whatever else they are feeling at the moment by firing their handguns in the general direction of somebody they don’t like and probably wounding somebody else just standing around twerking, they should instead fire their guns straight up into the air to communicate the important message: I Have a Gun.

And when that cultural engineering is finally successful, we can then spend the next 20 years persuading Milwaukee blacks to not bring guns to social events but to bring fireworks instead.