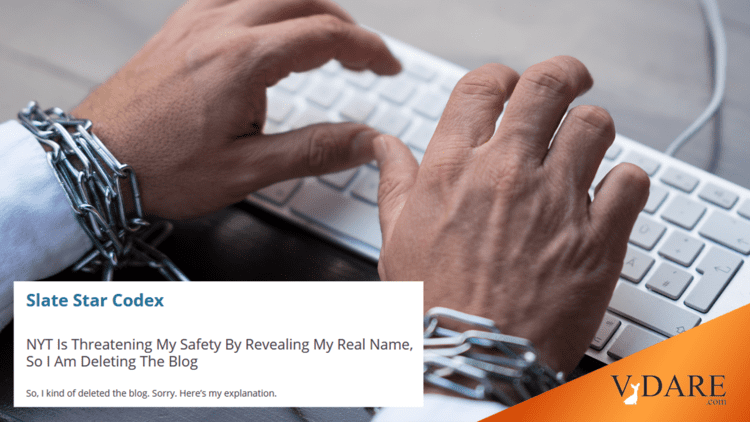 As I’ve often mentioned, a psychiatrist who blogs under the name Scott Alexander at his site Slate Star Codex (an anagram of his pen name) emerged as the most brilliant new public intellectual of the 2010s. His combination of extremely high IQ, unbelievably long attention span, and an almost saintly disposition have endeared him to many.

But now his blog is gone, because the New York Times was about to dox his real surname.

NYT Is Threatening My Safety By Revealing My Real Name, So I Am Deleting The Blog

So, I kind of deleted the blog. Sorry. Here’s my explanation.

Last week I talked to a New York Times technology reporter who was planning to write a story on Slate Star Codex. He told me it would be a mostly positive piece about how we were an interesting gathering place for people in tech, and how we were ahead of the curve on some aspects of the coronavirus situation. It probably would have been a very nice article.

Unfortunately, he told me he had discovered my real name and would reveal it in the article, ie doxx me. “Scott Alexander” is my real first and middle name, but I’ve tried to keep my last name secret. I haven’t always done great at this, but I’ve done better than “have it get printed in the New York Times“.

I have a lot of reasons for staying pseudonymous. First, I’m a psychiatrist, and psychiatrists are kind of obsessive about preventing their patients from knowing anything about who they are outside of work. You can read more about this here – and remember that the last psychiatrist blogger to get doxxed abandoned his blog too. I am not one of the big sticklers on this, but I’m more of a stickler than “let the New York Times tell my patients where they can find my personal blog”. I think it’s plausible that if I became a national news figure under my real name, my patients – who run the gamut from far-left anarchists to far-right gun nuts – wouldn’t be able to engage with me in a normal therapeutic way. I also worry that my clinic would decide I am more of a liability than an asset and let me go, which would leave hundreds of patients in a dangerous situation as we tried to transition their care.

The second reason is more prosaic: some people want to kill me or ruin my life, and I would prefer not to make it too easy. I’ve received various death threats. I had someone on an antipsychiatry Reddit put out a bounty for any information that could take me down (the mods deleted the post quickly, which I am grateful for). I’ve had dissatisfied blog readers call my work pretending to be dissatisfied patients in order to get me fired. …

When I expressed these fears to the reporter, he just said that me having enemies was going to be part of the story. He added that “I have enemies too”. Perhaps if he was less flippant about destroying people’s lives, he would have fewer.

(though out of respect for his concerns, I am avoiding giving his name here.)

As you can tell from the reporter being a he, it’s not Amy Harmon: Now that would have been a real meeting of the minds with an IQ gap of maybe 60 points…

After considering my options, I decided on the one you see now. If there’s no blog, there’s no story. Or at least the story will have to include some discussion of NYT’s strategy of doxxing random bloggers for clicks.

I want to make it clear that I’m not saying I believe I’m above news coverage, or that people shouldn’t be allowed to express their opinion of my blog. If someone wants to write a hit piece about me, whatever, that’s life. If someone thinks I am so egregious that I don’t deserve the mask of anonymity, then I guess they have to name me, the same way they name criminals and terrorists. This wasn’t that. By all indications, this was just going to be a nice piece saying I got some things about coronavirus right early on.

That sounds naive of Scott, who, indeed, is rather naive.

In reality, nobody is interested in coronavirus anymore. Instead, The Mob wants the blood of the open-minded.

This NYT staffer is a white man of apparently only moderately woke views, the kind of liberal most in danger from The Mob. I don’t know this, but he may have thought that getting Scott canceled for crimethink could save his job, for a while. People are doing pretty desperate things these days to save their careers.

In general, don’t trust reporters’ spin of what slant their upcoming article about you is going to take when they are trying to wheedle you into cooperating with it.