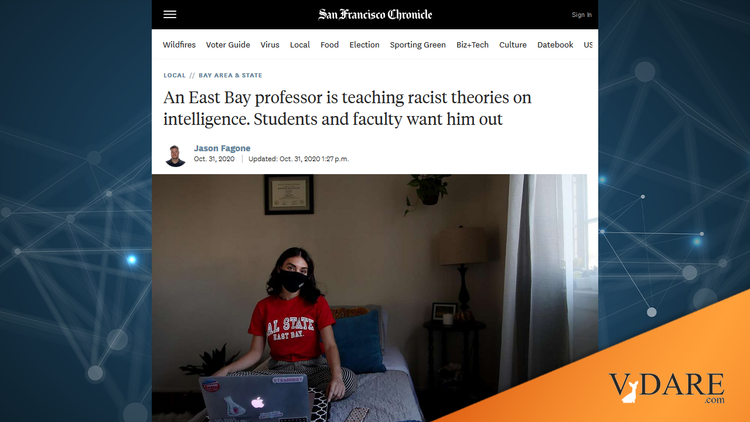 From the San Francisco Chronicle:

A California professor has for years taught a fringe theory that race influences intelligence, claiming that certain Black and Hispanic ethnic groups are less intelligent on average than white Europeans and Northeast Asians. https://t.co/OzpBQz8lac

I am wondering why this tweet is phrased so precisely as to be completely true.

Or perhaps the writer or editor is playing a joke on naive SF Chronicle subscribers by calling the exact truth a “fringe theory”?

An East Bay professor is teaching the theory that race influences intelligence. Students and faculty want him out

An economics professor at one of California’s most diverse public universities has for years taught a fringe theory that race influences intelligence, claiming that certain Black and Hispanic ethnic groups are less intelligent on average than white Europeans and Northeast Asians.

Complaints about Gregory Christainsen, a white professor emeritus at Cal State East Bay, bubbled up at a Board of Trustees meeting for the college system conducted via livestream video on Thursday. Three professors and three students aired concerns about Christainsen’s work, as well as the impact on students and faculty of color.

Christainsen “asserts in his work that people of sub-Saharan African descent, people like me and many of our students, have significantly lower IQs than any other ethnicity,” Pascale Guiton, a Cal State East Bay assistant professor of biology originally from the Ivory Coast said during the meeting. “It is appalling and scary to know that he and others like him get to teach and evaluate Black students and Black faculty.”

Meanwhile, a group of students posted an online petition calling on the university to “put an end to institutionalized racism starting with the termination of (Christainsen’s) emeritus status.” As of Friday morning, the petition had more than 900 signatures.

The push-back against Christainsen’s work comes amid wide alarm over a resurgence of far-right and white nationalist movements in the U.S. and around the world. Energized by President Trump, these organizations often draw on the core ideas of race science, spreading them in online communities and at public demonstrations.

Christainsen and leading figures in “race realism” are not trained geneticists, and experts in that field — as well as authorities on neuroscience and psychology — reject the conclusions of race realists, saying their work relies on faulty assumptions and dubious statistics.

Alerted to the comments and the petition Thursday afternoon, Christiansen defended his intelligence research as legitimate and accurate, saying it has been published in respected peer-reviewed journals and that critics are trying to censor him.

In several emailed statements to The Chronicle, Christainsen described his work as uncontroversial, falling within the mainstream of contemporary intelligence research. He said he welcomes debate and that students upset with his papers or his teaching “constitute a highly unrepresentative sub-sub-sample of the more than 10,000 students I have taught.”

“I would prefer that people provide evidence pertaining to the truth or falsity of research findings instead of recklessly using words like ‘bigoted,’” Christainsen said. “I do not enjoy reporting that different population groups have different average test scores, but I am open to continued discussion of reasons for test score differences.”

Specifically, while referencing the work of others or his own research, Christainsen has written that “the average level of intelligence in sub-Saharan Africa is quite low,” that African American women are overpaid “relative to their cognitive ability,” that brain size varies along racial lines and IQ is linked to brain size, and that “people should face issues of eugenics and dysgenics more forthrightly than has recently been the case.”

Christainsen formally retired from the university in 2016 but has continued to teach economics and management courses on a part-time basis. This semester, according to the university, he is teaching three classes: “Principles of Macroeconomics,” “Introduction to Urban Economics” and “Managerial Economics and Business Strategy.” Emeritus faculty retain many university privileges and the option to teach again in the future.

Asked about the criticisms of Christainsen made at Thursday’s meeting and the student petition, a university spokesperson said, “The statements and views expressed by this faculty member are antithetical to the core values of Cal State East Bay, which is committed to maintaining an inclusive community that values diversity and fosters tolerance and mutual respect.”

But the university also defended Christainsen on academic freedom grounds.

“It is important to note, however, that as a public institution of higher education, we are bound to uphold First Amendment guarantees of free thought and speech, including when — and in fact especially when — we strongly disagree with and find repulsive the viewpoints offered, as long as the expression is lawful and comports with our campus time, place, and manner policies,” the Cal State East Bay statement continued. …

“I would have said the same things in an interview with The Nation, Mother Jones, or The Huffington Post,” Christainsen told The Chronicle. “I certainly am not a ‘white nationalist,’ and in the interview I said that the evidence does not at all support ‘white supremacism.’ I am a classical liberal in the spirit of John Locke.”

An economist within Christainsen’s department, Christian Roessler, said there is “a difference between academic freedom and academic malpractice. Citing and interpreting statistics selectively to align with personal biases is expression, but it’s not academic expression.” Nina Haft, professor of dance, said such biases “undermine our Black students and create barriers to their success.”

The faculty speakers were followed by three students who demanded that Christainsen’s emeritus status be revoked.

“As a proud Mexican American, I am appalled that CSUEB has tolerated a professor who publishes racist ideology while teaching at one of the most diverse CSU campuses,” said Karen Parada, a master’s candidate in biology, who quoted from a 2012 paper in which Christainsen writes that Hispanics in the U.S. “score poorly on intelligence tests (on average), tend to have less massive brains than whites” and “have a high rate of dependency.”

“How is this person still allowed to teach?” asked another student, Ashmita Ahluwalia, a sophomore majoring in human resources.

And I bet Ashmita will indeed get a job in human resources.

Christainsen’s department head, Jed DeVaro, chair of economics, told The Chronicle that while he has no comment on Christainsen’s research and no statement to make on behalf of the department, “I would like to say that I personally condemn racism in all of its forms.”

The battle is flaring up after a summer of activism and introspection at the university, where the student body is 10% Black, 37% Hispanic, 23% Asian and 14% white.

Since the police killing of George Floyd and the Black Lives Matter protests that followed, some at East Bay have turned the lens on their own institution, questioning the administration’s commitment to its stated mission of “providing access to higher education for a diverse student body.”

Students and faculty have pushed officials to address inequities in hiring, funding and achievement. For instance, according to figures gathered by the Alliance for the Black Community, an independent group of faculty and staff, the four-year graduation rate of Black, Hispanic and Native American students at East Bay is half the system-wide rate, and Black tenure-track faculty leave East Bay at five times the rate of their white counterparts.

During some of these discussions, Christainsen’s papers about intelligence have drawn fire.

Christainsen and other researchers who identify as “race realists” argue that race and IQ are biological realities, not merely social or cultural constructs, and cite genetic studies performed in the last decade to bolster their case. And they say their work holds lessons for public policy: If intelligence can’t necessarily be altered, some forms of social spending are bound to be ineffective and some types of racial discrimination may be rational.

Angela Saini, a British science journalist who has tracked the movement, said race realism amounts to a rebranded form of eugenics, a discredited belief system that has been wielded to rationalize everything from Jim Crow laws to immigration bans to genocide.

“What they’re trying to do is justify inequality,” said Saini, author of the 2019 book “Superior: The Return of Race Science.” “They set up their own journals, and then they cite each other. So they give the veneer of respectability.” But the research, she said, is “nonsense on so many levels.”

Christina Chin-Newman, a developmental psychologist and professor of human development and women’s studies at East Bay, said she was “pretty shocked” when she first read Christainsen’s papers on race and IQ.

She said the papers make fundamental oversimplifications that first-year psychology students are taught to avoid: For instance, Christainsen treats IQ tests as reliable measures of intelligence, when the psychology field has known for decades that the tests are “inherently culturally biased,” Chin-Newman said.

James Ahiakpor, a Cal State East Bay emeritus professor of economics from Ghana, said he has known Christainsen since 1991. He described him as a supportive colleague, “cordial and respectful.”

Ahiakpor said he wasn’t aware of Christainsen’s intelligence research until now and has never discussed it with him. But Christainsen has earned his emeritus status “on the basis of his meritorious teaching and academic publications/contributions,” Ahiakpor said, adding that if people on campus object to Christainsen’s work, they should use internal channels instead of going public.

Christainsen’s detractors say students have complained about his classes in the past, but that the administration hasn’t supported them. DeVaro, the department chair, confirmed that he has received student complaints about the professor that were “addressed in accordance with university policy.” Christainsen said he can only remember one student who ever emailed him with concerns about a class discussion of intelligence research, more than eight years ago.

Jung You, an associate professor of economics at Cal State East Bay and the only woman economist in that department, said that while professors are free to publish what they want, they can cross a line if they bring biased views into the classroom that block students from achieving.

“He is teaching his own research, which is not neutral, particularly, but promotes very racist and anti-education ideas to his own students,” she said of Christainsen. “So that has really broken my heart, and I feel really troubled.”

How could any professor in the Bay Area possibly imagine blacks tend to be less intelligent than Asians on average?

And, by the way, vote for Proposition 16! California must bring back affirmative action to keep Asians and their high test scores from completely taking over.