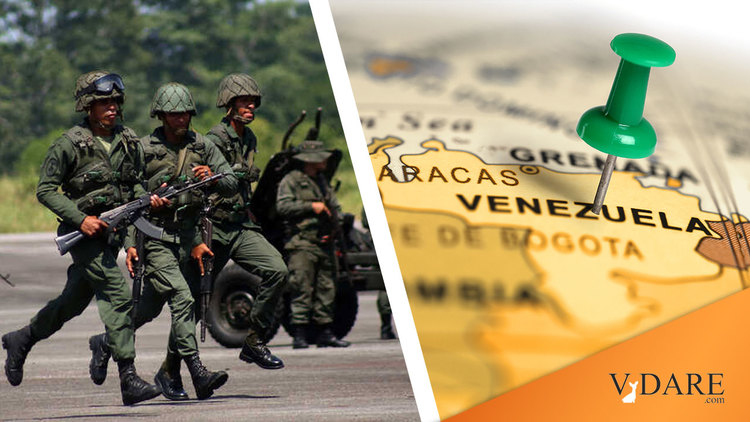 The defeat of Marxist guerillas in Colombia was one of the great achievements of rightists over the past few decades. However, they are crawling back, this time into neighboring Venezuela. Venezuela, of course, is a complete disaster. It was hailed as a model by Michael Moore, but now even he is studiously ignoring it.

Indeed, what we have is something close to state collapse. It's a fascinating example of how tribes and small groups of warriors may establish entirely new political orders within existing states.

They’re not police officers, civil servants or members of the Venezuela government, which has all but disappeared from this impoverished part of the country.

Quite the opposite: They belong to one of Latin America’s most notorious rebel groups, considered terrorists by the United States and the European Union for carrying out bombings and kidnappings over decades of violence.

Venezuela’s economic collapse has so thoroughly gutted the country that insurgents have embedded themselves across large stretches of its territory, seizing upon the nation’s undoing to establish mini-states of their own.

You might think it will never happen here, but to some degree, it already has. We already have groups that essentially operate free from law enforcement. And let's not forget the mini-statelet that was the "autonomous zone" in Seattle [Lessons From The Seattle Autonomous Zone, by Gregory Hood, American Renaissance, June 22, 2021].

You might ask yourself what the Department of Homeland Security is doing about all this. The answer is investigating itself for racism [DHS Is Investigating Itself For "Domestic Violent Extremism, by Hunter Wallace, Occidental Dissent, April 26, 2021].

This will get really serious as drug cartels become a larger part of American life.

There's an assumption among many rightists that we can simply go into the woods and build a parallel society, a kind of mini-state of our own. To some degree we can, so long as we operate strictly within the letter and spirit of the law. However, the post-America of the future will feature many groups that will be free to use illegal tactics and even deadly force. These groups may have vague ideological pretensions, but many of them will simply revolve around money, power, and sovereignty.

Information and Narratives will be a part of the emerging battleground. In Aris Roussinos's excellent article Anarchy Is Coming, he writes:

America’s generation-long war on terror has come home, as a new Green Zone sprouts up in the heart of the imperial capital and terror experts refocus their gaze on the internal enemy. Journalists are no longer chroniclers of political conflict but active participants, proxies in a sprawling, decentralized war of narratives. Instead of the claimed depoliticization of liberal technocracy, every aspect of life now functions as a source of conflict. There is no objective truth or reality, just warring narratives dismantling the political contract between people and their governments, “unable to contain the multiplicity of opinions, narratives, and messages being exchanged in an unconstrained cyber sphere.”

Again, it did not have to be this way. But when you refuse to enforce immigration laws because people within your own government hold a vague racial allegiance to invaders and your economic elite is desperate for cheap labor, you "bring the war home." You also undermine the legitimacy of the state and open the door for all sorts of tribes, armed groups, gangs, and even more organized forces to take power.

Though any such forces emerging from the right would be swiftly crushed by the Potomac Regime, that could change in the future. Consider this from the New York Times article:

When violence broke out in Guarero in 2018, the police and soldiers largely stood by as criminals fought brutally over the smuggling routes, according to residents and local rights activists.

As the violence spiraled, entire Wayuu clans became targets. Magaly Báez said 10 of her relatives were killed. Her entire village, located along a major gasoline trafficking route, was demolished. Most residents fled to Colombia...

Residents spoke of massacres, forced curfews and mass graves that brought to their remote corner of Venezuela the kind of terror Colombia experienced during its decades-long civil war.

Some people dared to report homicides, but it didn’t lead to charges, residents said. The crimes went unpunished — until the ELN stepped in to help last year, said Mr. Hernández, the Wayuu leader in Guarero. His account was corroborated by interviews with dozens of other Indigenous residents.

As the ELN took control, the fighting subsided last year, and refugees began trickling back. Street life resumed in previously deserted towns, and young men went back to ferrying fuel drums from Colombia on bicycles and motorbikes to resell in Venezuela.

Here, the guerillas are portrayed as practically benevolent. I have not been to this area of Venezuela so I can't judge. But it sounds like the type of thing that could (or should) happen in an American city tomorrow, if the federal government wouldn't act swiftly to prevent it.

I won't judge what's happening in Venezuela or pick sides. However, I have been to eastern Ukraine and seen how quickly state authority can evaporate. I've seen how quasi-organized groups become sovereign. And more than ever I urge Americans to organize into geographically concentrated, financially connected, and religiously/tribally/socially bound groups that can face the terrible future our rulers seem determined to impose on us.

Stay within the law, don't give them an excuse, and remain true to what's left of the historic American nation. But be prepared for the worst - not through militaristic training, crazed threats, or an obsession with showing your guns off on Facebook. (Unless that last one is about showing off your gains from lifiting, which is acceptable.)

We have a harder task—nation-building, or re-nation building from the ground up.