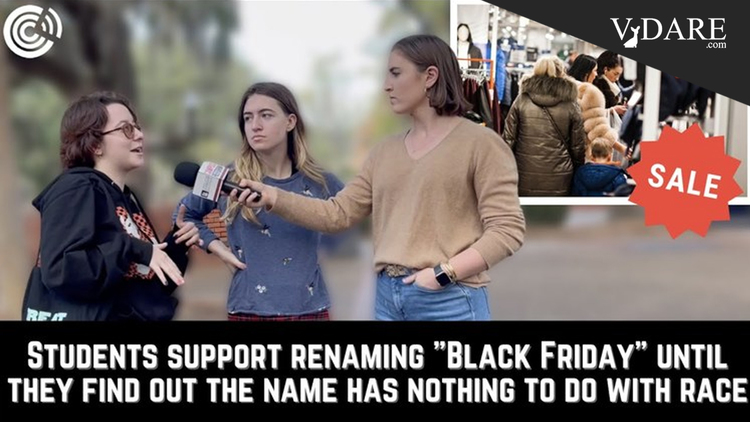 A  vocabulary issue: "Black Friday." This one is from the University of Florida. It follows an anonymous (and probably satirical) opinion piece in the Chicago Tribune headlined: Black Friday should be renamed so it is not ‘discriminating and profiling against black people.

The body of the article argues that

The name of the shopping day after Thanksgiving should not be called by the name of a nationality.

I guess that refers to people from the nation of Blackland.

Well, there is an organization called Campus Reform, which bills itself as  "a conservative watchdog to the nation's higher education system." Campus Reform sent a reporter to the University of Florida to go around the campus asking students whether the name "Black Friday" should be changed. You can see video of her asking them below:

Most students thought the name should be changed. However, when it was explained to them that the name "Black Friday" had nothing to do with black people but only referred to retailers' balance sheets at last going into the holiday-season black after eleven months in the red, the students changed their minds.

Call me naive, but I find that somewhat hopeful.

Several people I know are moving, or planning to move, to Florida. Maybe they're on to something.