The Bush Dynasty's Central Project Since 1953: Integrating Mexico Into The North American Economy

With Jeb Bush much in the news, it’s worth recalling how central to the Bush Dynasty has been the goal of integrating Mexico into the North American economy ever since 1953 when George H.W. Bush co-founded the Zapata Corporation. (It’s not surprising that George W. Bush named his little oil company Arbusto, or Bush in Spanish.)

At least from 1960, when Bush hired Jorge Diaz Serrano to be his front man for offshore oil drilling in Mexican waters because foreign oil companies have not been allowed to operate in Mexico since 1938, the Bush family has been interested in knocking down the barriers dividing America and Mexico.

The Bushes do have a point: Mexico is one of the biggest underachievers in the world, considering its excellent real estate and prime location adjacent to the United States.

Former Mexican foreign minister Jorge Castaneda suggested in his recent book Manana Forever? that Mexican mediocrity — which includes high accident rates — is encouraged by traditional anti-Americanism. America is the obvious example of an advanced country for Mexicans. But to avoid being turned into a banana republic by Guatemala or Honduras, Mexican elites since the Mexican Revolution of 1910-1920 have typically backed anti-American attitudes. But, according to Castaneda, anti-Americanism inculcates lackadaisical backwardness in Mexicans.

The Bushes have been very accommodating to the sensitivities of Mexican elites, including being enthusiastic about taking surplus Mexican nonelites off their hands.

American businessmen were welcome in Mexico during the dictatorship of Porfirio Diaz, but he was driven into exile by the Mexican Revolution of 1911. The American ambassador’s meddling worsened the political situation, bringing to power new leaders who repeatedly invaded America in 1915-1916, leading Germany to send the notorious Zimmerman Telegram inviting Mexico to reconquer Texas. It’s publication on March 1, 1917 (my father’s birthday) was a major step toward the U.S. declaring war on Germany a month later.

Then in 1938 the government of Mexico expropriated all the foreign oil companies and set up Pemex as a government owned oil monopoly.

One of the major planned accomplishments of the elder Bush’s administration was the NAFTA agreement.

George W. Bush came to office in 2001 and immediately focused intently on making deals over immigration and other matters with the new pro-business president of Mexico, Vicente Fox, until 9/11 came along.

Jeb is married to a Mexican lady and used to vacation at the ranch of the brother of President Salinas before he was sent to prison in the murder of his ex-brother-in-law, who had been caught being unfaithful to the Salinas sister with a man. As David Frum has noted, facilitating Mexican immigration is the topic closest to Jeb’s heart.

The one elected official in the next generation of Bushes is George P. Bush, who led the delegates to the 1988 Republican convention in the Pledge of Allegiance: 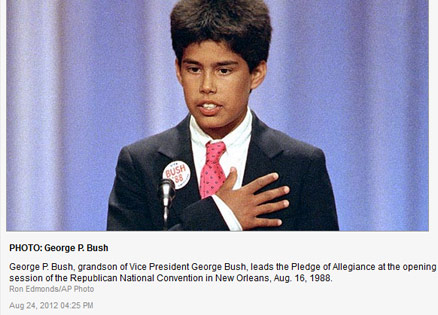 The Bushes want to elect a new people to keep on electing Bushes.