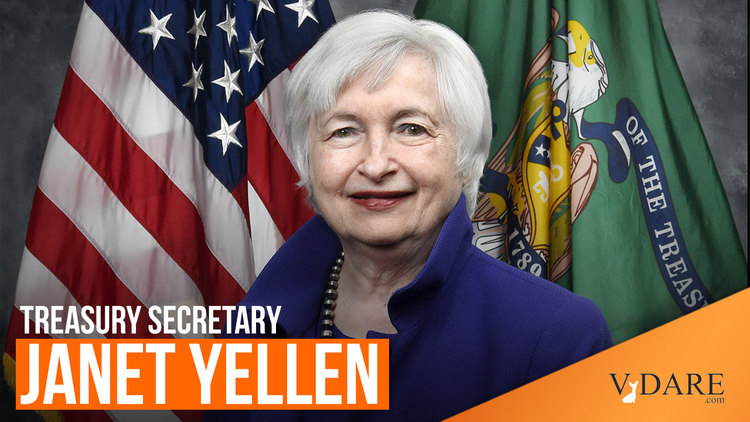 The Global Tax, The National Question, And A Global Immigration Moratorium

Two days ago, this would have been called a conspiracy theory. Now, it’s a self-evident Good Thing and you’re a weirdo if you don’t agree. Treasury Secretary Janet Yellen has called for a global tax rate.

U.S. Treasury Secretary Janet Yellen on Monday urged the adoption of a minimum global corporate income tax, an effort to at least partially offset any disadvantages that might arise from the Biden administration’s proposed increase in the U.S. corporate tax rate.

Citing a “30-year race to the bottom” in which countries have slashed corporate tax rates in an effort to attract multinational businesses, Yellen said the Biden administration would work with other advanced economies in the Group of 20 to set a minimum.

“Competitiveness is about more than how U.S.-headquartered companies fare against other companies in global merger and acquisition bids,” Yellen said in a virtual speech to the Chicago Council on Global Affairs. “It is about making sure that governments have stable tax systems that raise sufficient revenue to invest in essential public goods.”

The speech was Yellen’s highest-profile so far on international affairs, and came just as the spring meetings of the World Bank and International Monetary Fund began in a virtual format.

“It is important to work with other countries to end the pressures of tax competition and corporate tax base erosion,” Yellen said.

Of course, one thing that must be pointed out is that she did not call for this tax to go to a certain authority. It is simply a minimum tax with revenues going to national governments. She didn’t really call for a global tax per se.

However, who would coordinate these rates? Who would enforce them? The very concept necessitates a global tax administration, which would obviously need to be funded. The obvious source of funding is a direct global tax.

VDARE.com focuses on the National Question. Simply put, do nation-states have a place in the world today? Do peoples have a right to a state, which is to say, the political expression of a particular people?

American nationalists are in a bizarre position because the greatest enemy to American sovereignty is not Russia, or China, or even the United Nations. It’s the Potomac Regime. Darren Beattie has called it the Global American Empire. (Don’t miss yesterday’s interview with him on Scott Greer’s excellent podcast Highly Respected.) My only grievance with the GAE term is that I hate even granting them the “American” name.

Obviously, as an American, I don’t want any kind of global administration or any kind of global standard. I’m not especially concerned about raising the corporate income tax because Woke Capital has hardly been a friend to patriots. Yet this is one of those times where the means (a global tax administration) is more important than the ends (raising corporate taxes). I’d argue the Biden Administration’s real end is actually the proposed means—they want a global administrative body even more than they want to raise taxes on corporations.

However, wouldn’t Yellen’s concerns also apply to immigration? After all, you’re still going to have a race to the bottom if companies can count on an unlimited supply of cheap labor that essentially function as scabs. Unlimited immigration makes any kind of worker protection or wage standard impossible. If anything, higher taxes will simply make it more important to find cheap labor.

Of course, the UN has already tried to impose a global compact when it comes to immigration. This was the Global Compact of Migration, which actually would have imposed more immigration on signatories. Leaving this despicable conglomeration was one of the greatest things the Trump Administration did. Presumably the Biden Administration will get us right back in. The Biden Border Surge is happening either way, global compact or not.

The entire issue shows how hollow Yellen’s claims about opposing a “race to the bottom” really are. If we really want to get to grips with corporate tax rates, income inequality, and protections for workers and consumers, we need a Global Immigration Moratorium. Net immigration should be zero in each country, so each people can work to develop the best system to protect its own, in accord with each people’s unique folkways and traditions.

Until we see something like that, we know Yellen’s concern about a “race to the bottom” is feigned and is simply a cover for setting up a globalist body. If you are concerned about income inequality and protecting workers, you must be an immigration restrictionist. If you’re not, I don’t care if you call yourself a Democrat, a Communist, or an anarchist. You’re just another cheap-labor lobbyist.