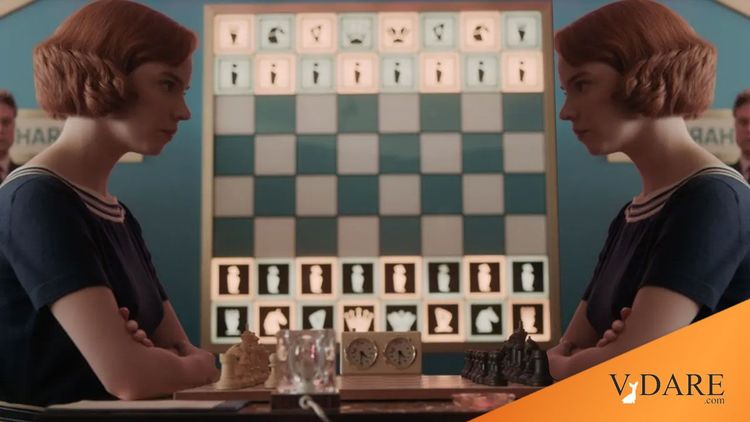 The Right to Women-Only Chess Tournaments?

Marginal Revolution blogger Tyler Cowen interviews Oxford professor of feminist philosophy Amia Srinivasan, who is promoting her book with the hubba-hubba title The Right to Sex. An interesting exchange:

COWEN: Should women’s chess, as a segregated activity, continue to exist? We don’t segregate chess tournaments by race or by anything — sometimes by age — but anything other than gender. Yet women’s chess is a whole separate thing. Should that be offensive to us? Or is that great?

SRINIVASAN: I don’t really have a view on that.

COWEN: But you’re opposed to segregation more generally, right? Isn’t it odd not to have a view on that?

SRINIVASAN: No, I don’t think it’s odd to not have a view on something about which there has been a great deal of ink spilled. There are philosophers and theorists of games and sports in general, who spend a lot of time thinking about how we should organize competitions, gaming competitions in particular. I don’t know what it means to be opposed to segregation as such.

I’m opposed to racial segregation. That is true. I’m not opposed to other forms of “segregation,” like age segregation. I think, for example, that it’s okay that nightclubs shouldn’t allow kids under 18 if you’re in this country, or under 21. I think there are interesting questions here. I don’t play chess, and I don’t follow competitive chess, so I don’t really have a view.

I haven’t played chess since the 1990s when I kept getting checkmated by my Palm Pilot device in 7 or 8 moves. But even I know that Judit Polgar made it to 8th in world in the 2000s, but, on the other hand, no woman is close to that level now. The popular Queen’s Gambit TV show is about a fictitious pretty young woman with a Bobby Fischer–like career in the 1960s. It was nominated for some of last weekend’s Emmys, so the general topic of women in chess is in the news.

I support the right to fun, even when it undermines feminist ideology.

This raises an interesting question regarding my perpetual topic of why some forecasts are more interesting than other forecasts. People like wondering about the future and trying to be right in guessing winners. But people get bored when the winners are too obvious. For instance, in the mid-20th century there was a popular exhibition football game just before the regular season held annually in Chicago’s Soldier Field. It matched the previous year’s NFL champion professional football team vs. the previous year’s College All-Americans.

This was an era when many All-Americans didn’t go on to play pro football, so it was the last chance to see some stars before they went off to law school or whatever. Initially, the pro team usually won, but the the college all stars broke through enough to keep it interesting. Over time, though, as the NFL turned into the Biggest Thing in America, the annual game became a wipe-out. Finally, in the mid-70s, the mighty Pittsburgh Steelers were thrashing the rookies when a torrential lighting downpour broke out in the 3rd quarter. That game was never resumed, and for that matter, the series was never resumed because the result had gotten too predictable and thus boring.

In some sports, handicaps are used to keep competitions hard to predict. Amateur golfers have elaborately calculated handicaps to give the lousier golfer a fighting chance to win the bet.

Horseracing has handicap races in which the faster horses are assigned more weight to carry, with the intention of, ideally, having all the horses arrive at the finish line in a dead heat. In other races, there can be traditional fixed advantages such as mares carrying 2 pounds less.

But there are limits to the popularity of handicapping big-time sports competitions because it interferes with a second fun question: Who is The Best?

Handicap races are more popular in the U.K. than in the U.S. The Kentucky Derby, for example, is not a handicap race. All the entrants carry 126 pounds. Casual fans can watch to find out who is the Winner of the Kentucky Derby, while more hard-core fans can play the odds to see if they can outsmart the other bettors.

Similarly, casual fans watch the Super Bowl to see who is the NFL champion, while more serious fans can test their expertise by betting the point spread, which bookies set to attract half the money to each team.

An interesting question is why there has been virtually no public demand for handicap matches between male and female athletes. Why not finish Wimbledon with the men’s and women’s champions playing for the overall Wimbledon title under handicap rules giving the woman a big advantage?

The last big handicap battle of the sexes in tennis that I can recall was in 1992:

A pay-per-view telecast, the match was played on Friday night, September 25, under hybrid rules to make it more competitive; [Jimmy] Connors was allowed only one serve per point, and [Martina] Navratilova was allowed to hit into half of the doubles alleys. Each player received a $650,000 guarantee, with a further $500,000 for the winner. Connors won 7–5, 6–2, as Navratilova made eight double faults and 36 unforced errors. Connors, too, was nervous and there was a rumor that he had placed a bet on himself to win at 4:1. According to Connors’ book The Outsider, he placed a million-dollar bet that he would lose no more than eight games.

Which he won, but just barely.

Men and women amateur golfers can perfectly well play fair handicap matches. They probably happen tens of thousands of times per year, but not that often. People like competing against their own sex and cooperating with the opposite sex. E.g., husband-wife doubles team competitions are popular in club golf, and the mixed doubles championship has been held at Wimbledon since the 19th century.

Male vs. female chess tournaments could be handicapped with, say, the man getting fewer pawns. But Polgar was so legitimately competitive at the world-class level that chess is kind of stuck in a place where it seems like the current situation, in which de facto men’s tournaments are open to both sexes while women have their own sex-segregated tournaments, makes sense without handicap inter-sex matches. But in another generation, maybe we’ll know whether or not Polgar was historically unique or the beginning  a trend toward top women.

But, in general, battles of the sexes are not very galvanizing to the public. It’s almost as if there will be no final victor in the battle of the sexes because there is too much fraternizing with the enemy.

Obviously, I’ve thought vastly harder about how to organize interesting competitions between men and women than Dr. Srinivasan has. A cynic might point out that is a long-standing sex difference between boys and girls: boys tend to obsess over improving the rules of their competitions, while girls don’t. They just don’t find it terribly interesting.

But why would a professor feminist philosophy want to wonder about that?