Over the last few months of the struggle against amnesty, Archbishop Roger Mahony was quieter than usual. In previous amnesty battles, Mahony has been a major supporter of open borders. This year, not so much. 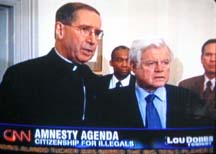 He has apparently been busy on another front — wrangling with lawyers to settle the huge pile of lawsuits against his diocese from victims of sexual abuse by predatory priests, the evil men whom Mahony protected for years by refusing to release relevant records.

The Roman Catholic Archdiocese of Los Angeles will settle its clergy abuse cases for at least $600 million, by far the largest payout in the church's sexual abuse scandal, The Associated Press learned Saturday.

Attorneys for the archdiocese and the plaintiffs are expected to announce the deal Monday, the day the first of more than 500 clergy abuse cases was scheduled for jury selection, according to two people with knowledge of the agreement. The sources spoke on condition of anonymity because the settlement had not been made public. [...]

Archbishop Mahony actively shielded a dozen pedophile priests and lied about at least one in court, actions which were included in the documentary film about priest sex crimes, Deliver Us from Evil.

Yet he has accused American citizens of being insufficiently moral for refusing to open US borders to his new parishioners (see Mahony Baloney).

On March 6, Lou Dobbs ran a clip of Mahony displaying his usual arrogance. Keep in mind that the Catholic hierarchy regard illegal immigration as a right for the poor, not a privilege allowed by the American people.

CARDINAL ROGER MAHONY, ARCHDIOCESE OF LOS ANGELES: This is an issue about people, and the focus upon people who are our neighbors, people who live here in our United States who are contributing to our country. We simply cannot exclude them. We must find ways to bring them into the full light of our society.

Don't miss a fascinating page of Roger Mahony quotes, e.g. "Our country stands at a critical point in its history. Our heritage as a nation of immigrants is at stake."

Remember - this is the man who doesn't want the shocking testimony of victims of predator priests to be heard in open court.