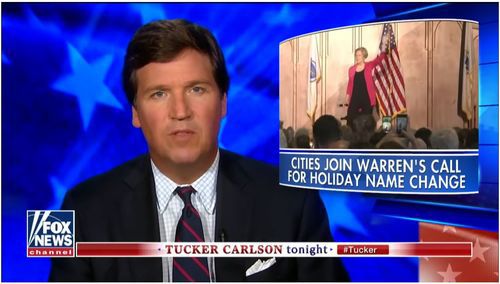 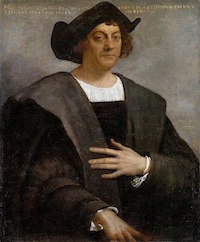 Columbus Day is an odd holiday for Americans to have, since it celebrates an Italian navigator who never came close to the present United States. He arrived in the Bahamas on his first voyage, and later reached Central and South America, but not the territory of the present USA.

Still, it’s a day off for some of the working stiffs—though a James Madison Day might be more appropriate since he is remembered as the “Father of the Constitution.”

However any patriotic topic is anathema to the left, so Columbus Day is becoming verboten for the PC crowd and beyond. Even Columbus, Ohio, has turned against its namesake, as noted by Tucker Carlson on his Monday show.

James Robbins is the author of “Erasing America: Losing Our Future by Destroying Our Past” joins us tonight. This is part of a larger trend you write about in your book which I hope our viewers read. tell us what that trend is.

JAMES ROBBINS: The trend is to assault the American narrative, to make us all feel ashamed to be Americans, to look at every aspect of the american story and say the founders was bad and the constitution is racist. And what better place to start than with Christopher Columbus who is really patient zero of the European invasion of america.

CARLSON: I could not agree with you more — that’s clearly the thread that ties all these stories together. What is the point of that? Why would they want to do that?

ROBBINS: The point is if we feel bad about our country, if we feel bad about the past, then they can rewrite any kind of future they want. Progressives want to turn the United States into a socialist country. In order to do that, if you say the founders were all evil men and an evil document and everything in the past was bad, they can come up with a future that fits whatever they want to make it.

ROBBINS: Oh, definitely. It’s all about shame; it’s all about blame. About the assault on Columbus — by the way, as a Buckeye, I am sad about Columbus, Ohio, ditching the holiday. I think they should change the name of the city if that’s what they’re thinking.

CARLSON: I agree with that — to Indigenous City.

CARLSON: Obviously this has been going on in academia for some time, but it seems to have spread to normal places like Columbus, Ohio, which is a great town, filled with normal people. How did it get to Columbus?

ROBBINS: Well, I think it’s been insinuated into the American education system for decades. Starting in the 1970s, we’ve had this creep of revisionism in American history books until it became the accepted narrative. Particularly with Columbus, he starts off chapter 1 in Howard Zinn’s revisionist history of America, so people have grown up saying Columbus is a bad guy.