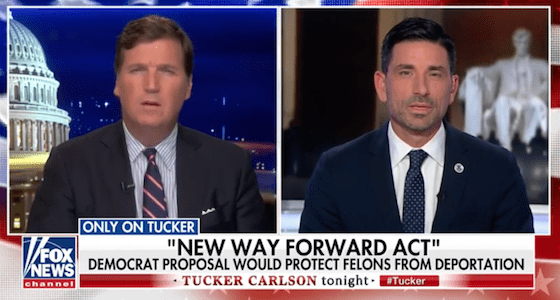 On Friday, Tucker Carlson reviewed the hazards of the truly scary House bill, the New Way Forward Act (HR 5383), which he first discussed on February 6.

The legislation, sponsored by 44 members of the House, is a shocking statement of what the Democrat party has become today with its support of open borders and hatred of America. Just for starters, known foreign criminals are better treated than US citizens, and a basic concern for public safety is missing entirely. An alien has to be practically an axe murderer to be deported, and the bill even requires citizens to pay to return deported aliens from their home countries to be reinstated as US residents. 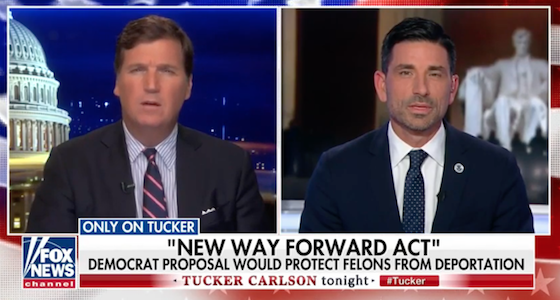 So the bill is crazy dangerous.

Tucker discussed the bill with DHS Acting Secretary Chad Wolf, who agreed that the New Way Forward is not the way to go at all.

TUCKER CARLSON: Well, in this show, we’ve told you a lot about the New Way Forward Act. That’s a bill co-sponsored by more than 40 sitting House Democrats that would completely remake America’s immigration system and the country itself for the sake of protecting foreign born criminals.

Violent felons could not be deported back to their home countries unless they received at least a five-year sentence. Even then a judge could easily override that.

The government, meanwhile, meaning you would have to pay to fly deported criminals back into the United States to resume living here. So what would this means for America? Nobody has a clearer picture of that than Chad Wolf. He is Acting Secretary of Homeland Security. He joins us.

So you’ve read this legislation. You’re familiar with it. If it became law, what would happen to the country?

DHS ACTING SECRETARY CHAD WOLF: Well, it’s very dangerous, I would say it completely guts our immigration enforcement system that we have in place. It also is — just from a pure legality perspective, it just guts the rule of law.

So envision a world where individuals no longer have to wait in line for visas. They can come across the border. It’s no longer a criminality to do that. They can then come into the system, we can’t deport them. We can’t hold people. It essentially abolishes I.C.E. and then on top of all of that, going back 25 years, we then have to find folks, bring them back into the country, re-litigate their immigration proceedings.

So if you’re looking for a way to abolish our immigration system, abolish I.C.E. and just rewrite our immigration code completely, this would be the legislation for you.

CARLSON: In effect, you’d abolish the country. Tell me the thinking behind this. Why would anyone want the U.S. government to affirmatively seek out foreign criminals and import them into the country?

Somehow, that’s not good enough. Somehow, we’ve stacked the deck against them, and so we need to bring them back, re-litigate them, and provide them attorneys at government expense.

So there’s a theory here that somehow the deck is stacked against these individuals when that’s not the case at all. They have full due process. They go through the immigration system like everyone else.

At the end of the day, if the judge — and immigration judge declares that they have no legal right to be here and orders them deported, that’s what the men and women of ICE do — carry out legal immigration orders and deport individuals. And so I think there’s a group of individuals that say we don’t like that. We don’t like the rule of law, and we’d like to rewrite it.

CARLSON: And we want to pay to bring the worst possible people into the country. It’s a kind of punishment meted out against America. Are you worried about this, like if this became law, would you be concerned about the country?

WOLF: Absolutely. I’m not sure I am so much concerned about it becoming law. I think there’s a lot of steps that would have to occur between the then and now, and obviously President Trump would never sign anything like this into law, but should it become law, yes, absolutely. It would be very devastating to not only the Department of Homeland Security, ICE, C.B.P., and our whole immigration mission at the Department.

It would be very dangerous for our country, dangerous for our communities. Again, you would have hardened criminals being able to come into the country illegally. We would have no ability to enforce that law and deport them, and so basically, your sanctuary city policies that we have in effect around the country in several jurisdictions become nationwide. And that may be the end result at the end of the day.

CARLSON: Boy, this is the kind of thing you do to a country you hate and clearly, they do. Mr. Secretary, thanks so much for joining us. I really appreciate it.