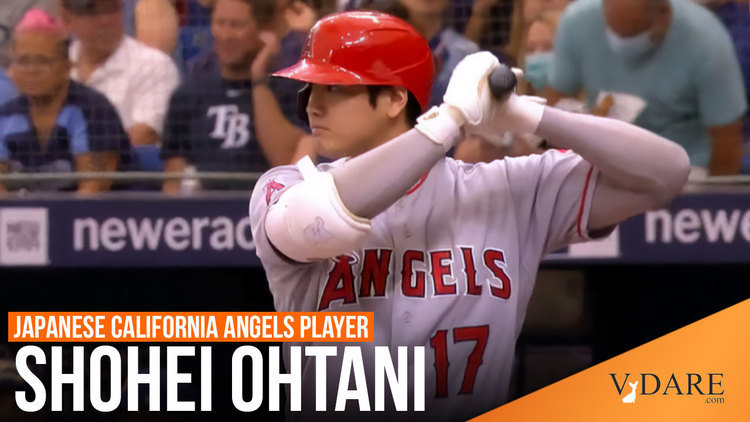 Tungsten Arm O'Htani Does It Again

Earlier: Why Hasn’t Any Other Ballplayer Done What Shohei Ohtani Is Doing?  and He’s Doing It Again

@Mattomic’s Tungsten Arm O’Doyle tweet was one of the best memes of the year.

Shohei Ohtani of the miserable Los Angeles Angels (why aren’t they the California Angels of the Fregosi-Ryan-Salmon years?) is having another remarkable season as a slugger with 33 homers, second in the American League to Aaron Judge’s unworldly 55 homers, and as a pitcher, fifth in the AL with 181 strikeouts, as he continues to be the first great pitcher-hitter since Babe Ruth in the late teens, more than 100 years ago.

On the other hand, if Aaron Judge breaks Roger Maris’s American League record of 61 homers (he currently has 55) while being an all-around outstanding ballplayer in all other facets of the game, while the Yankees win their division, it would seem hard to deny Judge the American League Most Valuable Player award over last year’s MVP Ohtani. After all, Judge carried the Yankees into first, early on, then has pretty much been the only reason they’ve stayed in first during their second half collapse. Currently, Judge is hitting .301—55 HR—118 RBI with three weeks to go.

Plus Judge is a fast, efficient base runner, having stolen successfully 16 times in 18 attempts this year, while Ohtani requires you to pay the Babe Ruth penalty in that he’s not as efficient a base stealer as he thinks he is, stealing only 11 of 20 this season.

In contrast, Ohtani didn’t get into his current slugging-pitching groove until the Angels had fallen disastrously behind. It’s like last year, when Juan Soto struggled early when the Washington Nationals decided to give up and trade Max Scherzer and Trea Turner to the Dodgers, only to finally live up to his potential in the last two months when the Nationals were hopeless. So I wasn’t dismayed that Bryce Harper of the Phillies, who was a key player deep into September, won the MVP award over Soto.

(I would have voted for the 107-win San Francisco Giant’s shortstop Brandon Crawford, but his most clutch performances tended to come after east coast scribes had gone to bed.)

Judge, in the spotlight of the baseball capital, is leading the American league in runs (110), runs-batted-in (118), home runs (55), walks 85, on base percentage, slugging average, and total bases.

Ohtani’s weaknesses are that while he’s hitting like one of the best sluggers in the American League, he’s not hitting quite like Maris and Mantle in 1961, as Judge is, and while he‘s pitching brilliantly he only pitches every 6 days so he’s throwing fewer innings than the other superstar pitchers. Also, Ohtani’s brilliant spell came after Mike Trout was hurt and the Angeles, despite Ohtani’s superheroics, team flamed out. So my view is that if Aaron Judge hits 62 homers to set the A.L. record and the Yankees win the division, then he’s the MVP.