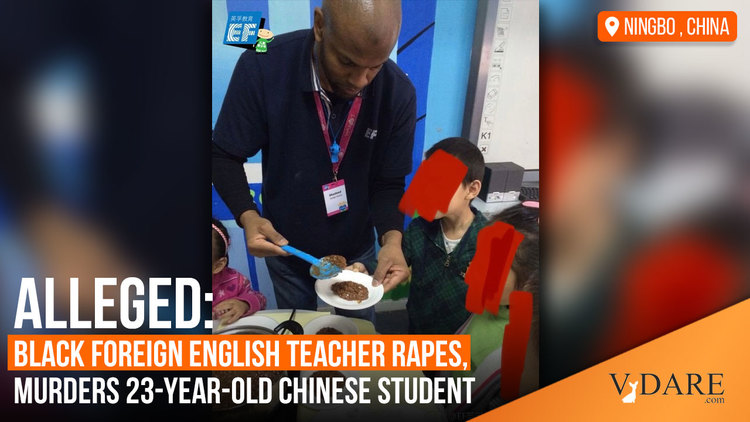 Here's a nasty story from Deutsche Welle, which is a sort of German BBC. Deutsche Welle has outlets in a multitude of languages; this is from the Chinese outlet. So yes, here's a chance for Derb to showcase his very rudimentary Chinese. Headline: 宁波黑人外教奸杀女学生惹众怒.

That translates as "The rape and murder of a female student by a black foreign teacher in Ningbo stirs public anger."

Ningbo is a big city on China's east coast, south of Shanghai. What happened, according to the story, is that a black American named only as Shadeed has been teaching English at Ningbo Institute of Technology since 2016.

On the evening of June 14th Shadeed made advances to a 23-year-old female student. When she rejected those advances, he raped her and stabbed her to death, presumably in that order—we're not given many details. This happened in some woods near the college, and that's where the victim's corpse was found.

The newsy thing here is not so much the contents of the story as the story about the story. It's been reported on numerous Chinese outlets, including China-based English-language outlets, but they all report the same fragmentary details, just expressing different degrees of outrage about foreigners being beastly to Chinese people.

I haven't been able to find any reports in Western outlets at all. Nor do I have any confirmation of the alleged rapists' name and nationality. The Chinese outlets that give those details all do so in the same formulaic language as the Deutsche Welle report, so I assume they're all drawing on a common source.

Becker tells of a reporter in China in the 1920s responding to a request from his editor for "the bottom facts." His reply: "There is no bottom in China, and no facts."

Although, if this horrible incident did happen, all credit to Deutsche Welle for telling us, right there in the headline, that the perp is black. In the U.S. media he would just be "man," or at best something like "New Jersey man."