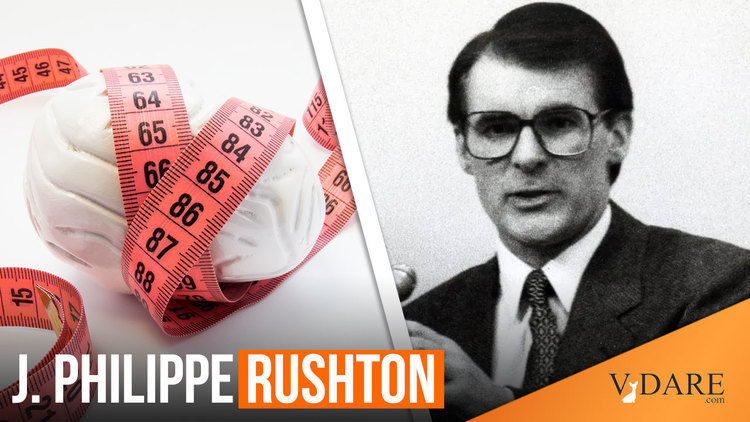 To those of who dwell down in the fetid fever swamps of race realism, the name of J. Philippe Rushton is held in high regard.

You may have seen us refer to Rushton's Rule of Three. This rule says, to quote our own Steve Sailer, that, quote:

On a wide variety of quantifiable measures … the averages for blacks and East Asians wound up at opposite ends with whites in the mediocre middle.

Rushton, who died in 2012 at the too-young age of 68, was a social psychologist whose research interests were summed up in the title of his 1994 book Race, Evolution, and Behavior. He was a good-natured and polite man, not afraid to discuss his ideas with anyone.

Now, not quite nine years after his death, Rushton is being unpersoned. The magazine Psychological Reports retracted two of his articles last December on the grounds that they were "unethical, scientifically flawed, and based on racist ideas and agenda."

This week we learn that the magazine, burrowing deeper—no effort should be spared when investigating thoughtcrime!—found three more of Rushton's papers from twenty-odd years ago, and has retracted them for the same reasons [Journal retracts more articles for being “unethical, scientifically flawed, and based on racist ideas and agenda”, Retraction Watch, August 25, 2021].

If you would like to perform a small act of defiance against these pompous, cowardly, innumerate, and obscurantist fools, go online and purchase a copy of Race, Evolution, and Behavior. If you've already got a copy, buy another one anyway and give it to a friend.