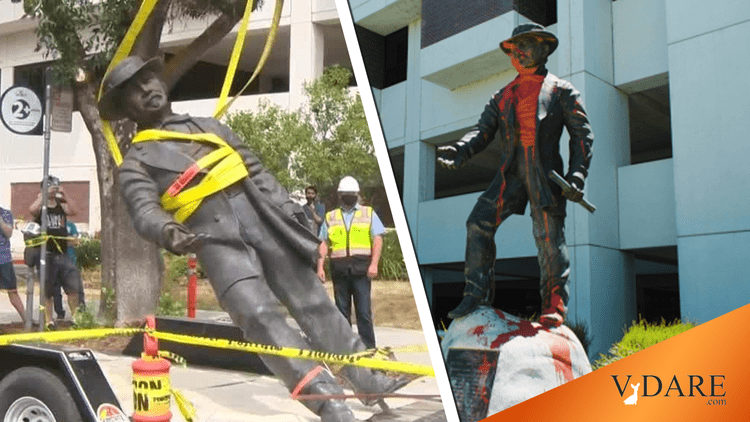 It’s happening so fast few dare speak out, because no one has the words to accurately articulate the scope of the devastation.

Manifest Destiny has been supplanted. The rule of Black-Run America (BRA) is washing away the civilization our ancestors built out of the wilderness on this continent.

Statue of pioneer linked to California Gold Rush is removed from outside Sacramento hospital KTLA.com, June 15, 2020

A statue honoring a colonizer who laid claim to the land where the discovery of shiny flakes of gold sparked the California Gold Rush was removed Monday outside a hospital bearing his name in the state capital.

Several dozen people cheered as a work crew lifted the statue of John Sutter — a 19th century European colonizer of California who enslaved Native Americans — off its pedestal outside Sutter Medical Center in the latest reckoning of historical figures being removed from public display.

Across the U.S. and Europe, statues of Confederate officers and colonial figures are being toppled, sometimes forcibly by protesters, as the uproar over racism spreads after the police killing of George Floyd in Minneapolis.

“OK, he’s Sutter, but he’s a real son of a b——,” said Frank Condon, a playwright who was walking to a doctor’s appointment. He had marveled hours earlier that it was still standing and wondered why it hadn’t been taken down.

Sutter, a European immigrant who had built a fort in Sacramento in the mid-1800s, had laid claim to land on the American River in Coloma about 35 miles (56 kilometers) away in the Sierra foothills. James Marshall, a carpenter, was building a mill there for Sutter when he discovered gold in 1848.

The two tried to keep it a secret, but word got out and men flocked to the foothills in search of their fortune.

In addition to the replica fort in downtown Sacramento that still bears his name across from the hospital, there is a county and several schools and streets named for Sutter across California.

“Out of respect for some community members’ viewpoints, and in the interest of public safety for our patients and staff, we are removing the John Sutter statue that was originally donated to Sutter General Hospital,” a Sutter Health spokesman said in a statement.

Sutter Health did not say whether it was considering removing Sutter’s name from the nonprofit hospital system.

Ashwut Rodriguez, a California Indian from Sacramento, spit on the statue of Sutter after it was loaded onto a flatbed and tied down.

“This is only a Band Aid on a broken arm, but we can’t celebrate or consider anything until you stop celebrating these evil people,” said Rodriguez, 42, who came out with his family and young children to watch.

The statue will be kept in storage until a decision is made where it will go, Sutter Health spokesman Gary Zavoral said.

Sutter himself did not benefit from the gold rush and his empire crumbled after the discovery was made.

Listening to the Beach Boys about the golden shores of California doesn’t mean much in 2020, does it?

It was never going to stop with Confederate Statues/Monuments.

It was never going to stop with tearing down statues/monuments or renaming streets/schools honoring the Founding Fathers of this nation.

It’s a war on every last vestige of the history white men created on this continent and the civilization they alone birthed.

So does the past.

And so dies the future.