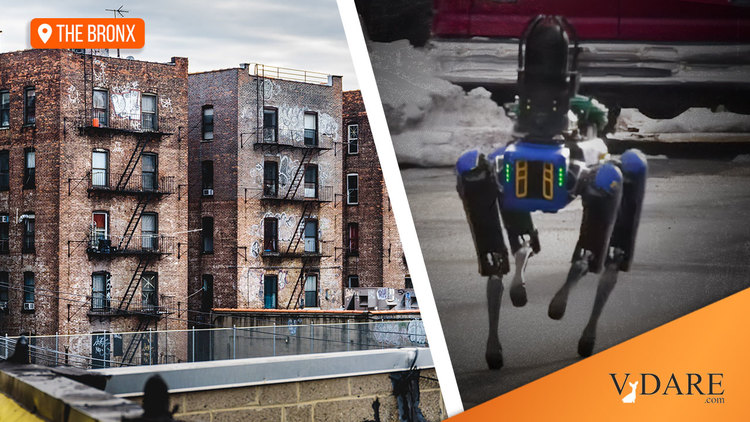 When A Robot Police Dog Is Deemed "Racist" Have We Reached Peak Wokeness?

When robot dogs are considered racist, there’s no hope for inanimate objects from the woke mob.

Alexandria Ocasio-Cortez has denounced the NYPD’s new crime-fighting robot dog, appearing to accuse the department of racism for deploying the device for testing in only low-income communities of color.

The Democratic firebrand blasted the police department’s four-legged ‘Digidog’ in a succession of Thursday tweets, two days after the cyber hound was filmed responding to a home invasion in her home borough of the Bronx.

‘Shout out to everyone who fought against community advocates who demanded these resources go to investments like school counseling instead,’ she wrote.

Now robotic surveillance ground drones are being deployed for testing on low-income communities of color with under-resourced schools.’

Ocasio-Cortez then argued that police funding that allows for new technology like the Digidog would have better served the community if it had been allotted to programs for education or housing.

‘Please ask yourself: when was the last time you saw next-generation, world class technology for education, healthcare, housing, etc consistently prioritized for underserved communities like this?’ she added in a follow-up tweet.

Digidog, which was designed by Boston Dynamics and has a starting price of around $75,000, joined the NYPD last year.

The blue and black rover, which weighs approximately 70 pounds, is equipped with lights, two-way communication, and video cameras, the department said.

The robot is fitted with cameras to search an area and send back real-time footage and is powered by artificial intelligence to navigate on its own.

The cyber canine can also climb stairs, see in the dark, and run at about three-and-a-half miles an hour. It was designed for emergency situations that would otherwise be too dangerous for human officers.

Digidog is currently being tested by the NYPD’s Technical Assistance Response Unit, which deployed it at a home invasion and barricade situation on East 227th Street near White Plains Road in Wakefield on Tuesday.

Non-whites committed 96.4% of the homicides and 98.3% of non-fatal shootings in New York City, a city that is 33 percent white. This data is courtesy of the New York Police Department and might just represent where our robotic dog allies are deployed to make the city safe for citizens—regardless of color—from those who commit crime.