Good for President Trump’s brain trust for researching the under-reported evil of Chain Migration. A measure of its enormous effect: during the 10 years from 2005 to 2015, the U.S. permanently resettled roughly 9.3 million new immigrants on the basis of family ties — 70 percent of the total immigration. In short, immigrants are choosing the new residents of the US, not the American people. The chain migrants tend to have few skills and little to offer the United States. 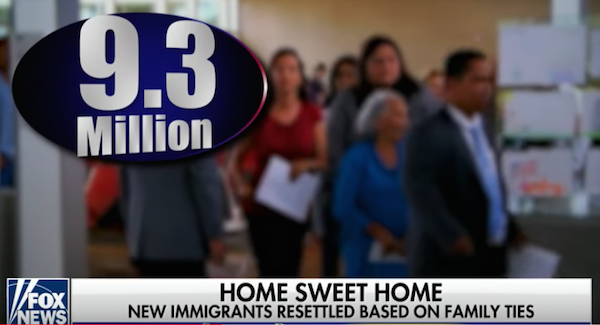 Keep in mind that chain migration is a terrible legacy harming America caused by Ted Kennedy, a major architect of the 1965 immigration bill. That legislation opened the floodgates in many ways, with a big doorway being the expansion of chain migration. NumbersUSA says of that part of the bill: “Congress extended the chains to every country of the world and reversed the priority so that the chain categories had preference over skill categories.” That change in law is how America got 1.7 million Mexicans, 600,000 Indians, 600,000 Indonesians, over 500,000 Chinese and 80,000 Iranians in the ten years analyzed.

Between 2005 and 2015 the U.S. permanently resettled roughly 9.3 million new immigrants on the basis of family ties; James Rosen goes in-depth for ‘Special Report.’

For the first time, the White House said, the federal government has counted the green cards issued between 2005 and 2015 to migrants admitted through family preference, or as immediate relatives of migrants already admitted into the country in perhaps the fullest portrait of “chain migration” ever developed.

“For years, we’ve known that large numbers of immigrants have been coming based on petitions from previous immigrants,” U.S. Citizenship and Immigration Services Director Lee Cissna told Fox News. “But this is the first time we really kind of see the whole scope of the problem. And legislators or policymakers at DHS can do what they need to do address the problem.”

That’s more than 70 percent of all new immigration in that period, the White house said, adding it is also the primary driver of low-skilled workers’ entry into the U.S. A phenomenon analyst say most directly hurts American minority groups with comparable skills.

“These numbers are explosive. They show that American immigration skews almost entirely towards family-based admissions,” said a White House official who briefed Fox News on the data.