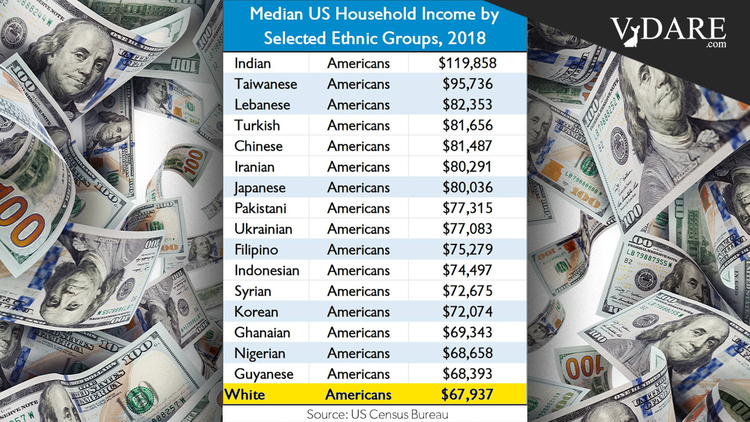 Whites Come In SEVENTEENTH In Median Income, Behind Many Immigrant Groups (Although Still Ahead Of Blacks, Hispanics, And Hmong, Etc.)

Earlier: Democratic Platform to White People: We Hate You

Under the heading Worst. White. Supremacists. Ever., Powerline's John Hinderaker points to a statement in the Democratic Party platform that says

Hinderaker goes on to add

But wait! Notice how they tried to slip that one by you: “some Asian Americans and Pacific Islanders.” Why only “some,” in a land defined by white supremacy? There is, of course, a story here, one that the Democrats will never tell. These are how various ethnic groups ranked by median household income in the 2018 census. Whites come in 17th:

The DNC's point is that if whites are doing better, it's because whites are racist, not, for example, that other groups are lame, or not trying hard. Hinderaker's point is that American capitalism will allow people to get ahead, whatever their color. He doesn't offer an explanation for the failure of blacks, Hispanics, and some Asians, etc.

I'm going to put the chart below, and I don't believe that a white income lower than immigrant groups that work for Microsoft, or run dollar stores or Indian motels is a good thing. (HInderaker is showing it as proof that America isn't racist.)

As I've said repeatedly, those skilled or entrepreneurial immigrants simply displace a better class of American.

What I want ask, and I think I know the answer, is: who are the lame, underperforming Asian Americans and Pacific Islanders?

The answer, I think, among Asians is the Hmong, and among "Pacific Islanders," i.e., Micronesians, Tongans, and Samoans, is almost all of them, barring a few  NFL players. (Did you know that  a Samoan male is 56 times more likely to play in the NFL than a non-Samoan male? )

Here are some of our stories about Hmong:

Here are some of our stories about "Islanders":

While the groups below are, of course, displacing white Americans, they're creating less work for local police forces than their low-achieving fellow immigrants.

But both phenomena mean an Immigration Moratorium would be a good idea. 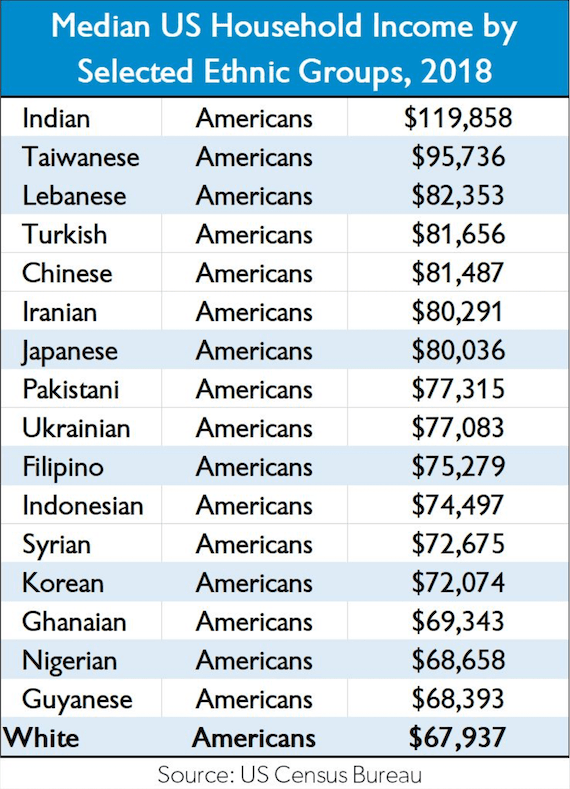