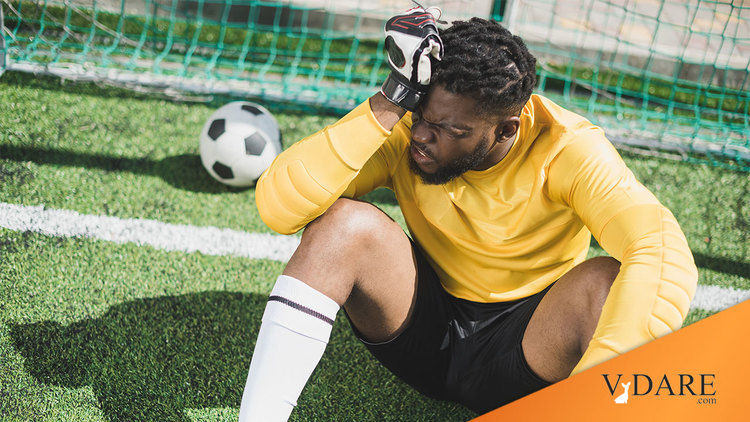 Why Are There Few Black Third Basemen and Soccer Goalies? Racial differences in sports performance are often ascribed to culture—e.g., there aren’t that many black America’s Cup yachtsmen for obvious reasons—but there are some striking ones within sports, such as which positions different races tend to play in baseball.

It wasn’t always like this: the two most legendary Negro Leagues stars were pitcher Satchel Paige and catcher Josh Gibson.

Today, though, in the U.S., African-American youths who are good at baseball typically play on mostly white teams. Interestingly, this high degree of integration seems to lead to larger gaps in which positions black Americans play than, say, in the eastern Dominican Republic, where all the players are more or less black, so blacks play all positions. In the U.S., on the other hand, the typical black advantage in speed means they tend to play the outfield or middle infielder rather than catcher, pitcher, or, surprisingly, third base.

The graph above comes from Baseball Egg’s tables of the top 25 players since 1901 by career Wins Above Replacement (a modern synthetic measure that attempts to sum up a player’s accomplishments over the quality of player who is always available to bring up from the minors). Players are grouped by the position they played most and then all their accomplishments are accredited to them at that position (e.g., Pete Rose played 2nd base, 3rd base, 1st base, left field, and right field, but he won his MVP in left, so he’s listed only as a left fielder and all his WAR earned at any position goes to him as a left fielder).

Because baseball wasn’t integrated until 1947, I counted only postwar players for calculating racial shares (e.g., I counted Joe DiMaggio as prewar and Ted Williams as postwar, but I could see other ways to judge that).

Because this is based on career figures, the youngest on this list of 225 players are right fielder Mookie Betts (black) and center fielder Mike Trout (white).

One of the stranger patterns is seen at third base, where none of the top 21 postwar players manning the hot corner have been African-Americans vs. over half of the top right fielders.

Update: I also looked at the top 100 third basemen by WAR who started from 1939 onward: 78 have been white Americans and 6 African-Americans (counting Dick Allen as 3rd baseman rather than as a 1st baseman as my other source did, Bill Madlock, Terry Pendleton, Jim Ray Hart, Chone Figgins [the only good 21st century black American third baseman], and Ed Charles).

Third base has been kind of weird for a long time. Only four of the top 25 third basemen of all time were prewar players and none rank higher than 15th (Home Run Baker). Until the 1950s, third basemen just weren’t that good.

Back in the Dead Ball Era before Babe Ruth revolutionized the game around 1920, batters tried to bunt for a base hit down the third base line all the time. So, the third baseman was an acrobatic defensive specialist, and any offense he brought was pure bonus. When power hitting became the fashion in the 1920s, baseball more or less forgot to look for better hitters to play third for a couple of decades. There were a few proto-modern third basemen, like Harlond Clift in the late 1930s, who hit homers and took walks like Mike Schmidt in the 1970s-80s, but he played for the awful St. Louis Browns so nobody much noticed him.

Interestingly, since then they’ve been almost all white Americans, 17 out of 21, with no African-Americans. This doesn’t mean blacks can’t play third. The number 3 guy on the list, Adrian Beltre, behind only Schmidt and Matthews, is a black Dominican.

In contrast, right field, another position that requires a strong throwing arm and is often inhabited by power hitters, is 53% black and only 18% white among the top postwar players.

But, apparently, if you are a strong-armed right-handed African-American who can hit for power who could play third, you’ll more likely find your strong right arm in right field, where your stereotypical footspeed is more valuable than at third.

In turn, whites with a good first step but lower top speed are likely to focus on third base. Like catcher, it’s a somewhat frightening position with pulled line drives being hit at you from 90 feet away.

The 1950s Milwaukee Braves established the template with Matthews at third and Henry Aaron in right.

For example, Hall of Fame right fielder Harry Heilmann hit .400 once and .390 three times in the 1920s despite being perhaps the slowest player before catcher Ernie Lombardi. Today, he’d be a designated hitter, and in the recent past he’d be trained hard to get by as a third baseman in the way that Miguel Cabrera played third to let Prince Fielder play first. There’s no way that a Heilmann could be allowed to play right field today.

Right fielders probably handle fewer chances in the field than any other position, so they don’t have to be as mentally checked into the game all the time, as, say, shortstops, much less catchers. According to Bill James, fewer right fielders become major league managers than any other position. For example, Gary Sheffield, one of the supreme athletes in recent baseball, started out at shortstop, moved to third, then settled in in right field. Yasiel Puig, a million-dollar body and two-bit brain type, played right field as well.

The physical demands of fielding at third base seem a little like those of a soccer goalie. You don’t need to be a fast runner but you need to be able to dive sideways abruptly from a standing start.

Chelsea’s match against Rennes in the Champions League is a rare meeting of Black goalkeepers on club soccer’s biggest stage. But why are there so few of them?

Most kids don’t want to play goalie. It’s kind of boring and everybody notices when you get beat. Playing goalie is much like how the fat kid who isn’t a fast runner gets stuck being the catcher. The faster kids play the more fun positions.

But then catchers and goalies have the best view of any player down on the field and wind up being the coach on the field.