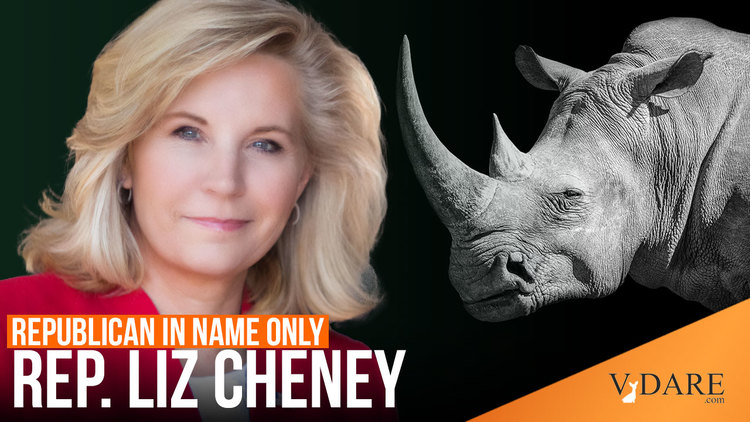 Another case of the Winter For RINOs phenomenon: Representative Liz Cheney, currently chairman of the House Republican Conference, the GOP's House caucus. When the conference has its scheduled meeting next Wednesday it seems probable members will remove her from that chairmanship. Why? Mainly because she's a Never Trumper, in fact a Never, Ever, Over-My-Dead-Body Trumper. She really hates the orange man, and voted to impeach him the second time around.

Speaking of hereditary aristocracies, it doesn't help—although there's no sound reason why it either should or shouldn't—that her Dad is Dick Cheney, George W. Bush's Vice President, a neocon's neocon.

Looking up Liz Cheney's report card on immigration votes at the NumbersUSA website, they have her as a career grade A, A-plus in this Congress, so she's not all bad, just too much a Never Trumper and, yes, a neocon on foreign policy issues.

We're hearing that if voted out of her chairmanship on Wednesday, Rep. Cheney will be replaced by Rep. Elise Stefanik, who represents New York's 21st district, up there in the Adirondacks. Here we come up against somewhat of a mystery.

I didn't know much about Rep. Stefanik, so as is my wont I first looked her up in the NumbersUSA immigration report cards for congresscritters. They have her as a career C-minus, a D-minus in this Congress. When you drill down to the details, there are a couple of A-pluses on particular issues, but they're swamped by Cs, Ds, and Fs.

And yet I see on Breitbart, May 7th, that the National Border Patrol Council has endorsed her to replace Liz Cheney: a NumbersUSA D-minus to replace an A-plus. Weird. This has to be the Trump factor again. Trump has given Rep. Stefanik a whole-hearted endorsement.

The only things I can deduce from all that with any certainty are, (a) Trump really doesn't care that much about immigration, and (b) this really is Trump's GOP now.