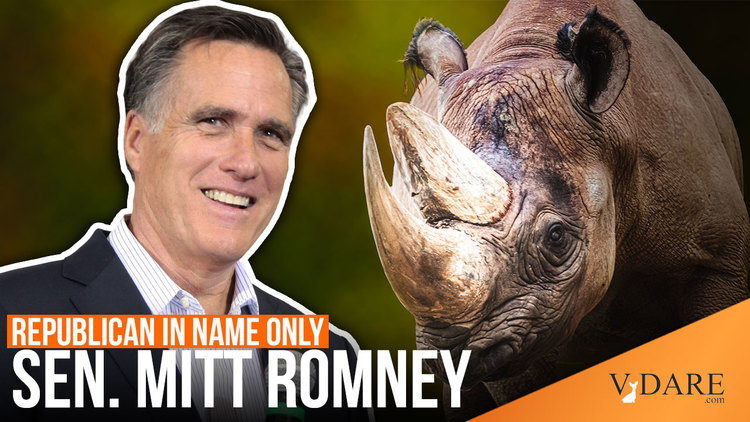 Spring is in the air! The trees are in blossom and daffodils are bursting out all over, along with a lot of other flowers I don't know the names of. Mrs. Derbyshire is the horticulturalist in our union.

For RINOs, though—and I don't mean the big lumbering charismatic megafauna, I mean institutional Republicans, R-I-N-Os—for RINOs and Never Trumpers, it must feel as though winter is coming on mighty early this year.

Case in point: Mitt Romney. Last Saturday, while you were enjoying your weekly dose of Radio Derb, Mittens was addressing the Republican Party's Utah convention.

Well, he was trying to: He was booed—"lustily booed," according to the Salt Lake Tribune—by the convention delegates when he stepped up to speak. Among the shouted words from the floor that could be picked out from the general booing were "traitor" and "communist."

Aren't you embarrassed? … I'm a man who says what he means, and you know I was not a fan of our last president's character issues … You can boo all you like. I've been a Republican all of my life. My dad was the governor of Michigan and I was the Republican nominee for president in 2012.

You can put negative constructions on that. The sincerity defense is no defense: Lenin was perfectly sincere in his intention to end private property and massacre his opponents. Sure: we'd prefer our politicians to be sincere about the things they claim to believe, but we have a preference at least equally strong that their beliefs agree with ours.

And the mention of Mitt's 2012 presidential run just brings to our minds the title of Sam Francis' 1994 book Beautiful Losers, subtitle "Essays on the Failure of American Conservatism." We conservatives are tired of failing, Mitt, however gallantly. We want some success.

As for your Dad having been governor of Michigan: What's that got to do with anything? What do you think we have going here, a hereditary aristocracy?

I feel a twinge of guilt, mind, about those negative constructions. Romney is no Lenin. He's decent and humane. On my one personal acquaintance with him, I found him well-mannered, thoughtful, and honest about what he didn't know. As governor of Massachusetts, he took a firm line on illegal aliens—firmer than the average Republican, anyway. His 2012 presidential run was well fought and not any kind of a disgrace—he took 24 states and 47 percent of the popular vote against Barack Obama, darling of the media.